There's nothing quite like an author being surrounded by mobs of passionate readers, even if those said readers are present because of a series of books not associated with said author (me). Yesterday I attended (and worked) one portion of an Outlander weekend, a Scottish festival at Whippoorwill Village in Ferguson, North Carolina. 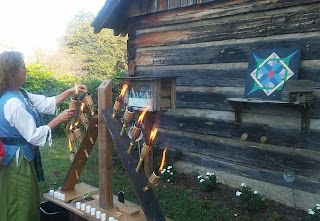 At the opening ceremony, various clans lit a torch on the torch tower honoring their branch of the greater Scottish family. These people gathered together not only to visit with each other, but to appreciate their heritage brought out in the Outlander book series by Diana Gabaldon. They had read every single page of eight books, soaked up every word, breathed them, mulled over them and wanted to discuss them with others just as passionate. Perhaps they held a slight jealousy of the heroine's ability to walk before a standing stone in 1946 Scotland and be sucked back into the Scotland of their eighteenth century ancestors. By book four, this heroine appeared in the Carolina's colony in time to fight the revolution against the crown. What a concept!

Disclaimer, here. I have read only the first in the series, but after yesterday I'm determined to start book two. Another disclaimer. I'm not Scottish. German actually. An Irish friend once gave me a pin to wear on St. Patrick's Day that proclaims, "Everyone's Irish Once a Year!" Yesterday was my "Everyone's Scottish" experience. I know which clan I wanted to join: 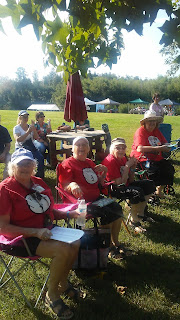 The one with cousins from various states wearing shirts identifying them as "Trouble." Wouldn't that be a fun clan to be a member of? 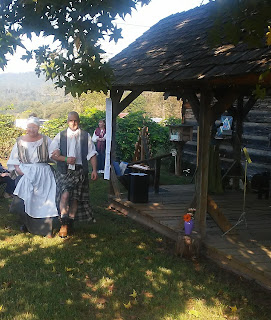 But then again, wouldn't it be joy to be a member of any Scottish family and watch with pride as they remembered the people before them who made them what they are today. 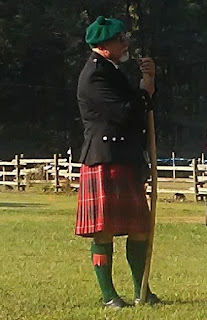 There's just something about a man in a skirt...excuse me, kilt, even when he has a bagpipe over his shoulder: 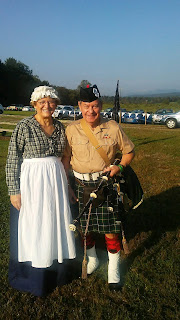 Yes, that's me with the piper. Even his version of "The Campbells Are Coming" brought tears to my eyes. I'm decked out in period clothes because I was a volunteer there at the village. I ran the village store for the first three hours, the store by the way, that is in chapter one of my Wheels and Moonshine book. The last couple of hours I was a docent in the schoolhouse where I shared life in the not-so good old days of one room schoolhouses.

In between my duties I was able to partake of an authentic (and super delicious) Scottish, cooked over the open fire, meal prepared by Dawn Mathews. Chicken stew, bannocks (an oat cake bread common in Scottish homes), and the best apple crisp I've tasted in ages. Oh, and the goat cheese...yum! 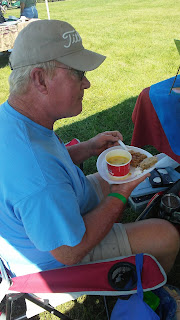 That's my husband, Van, enjoying his portion under my booth's tent. He sold my books as I flitted about enjoying my Scottish moment under the Carolina sun.

I do have a book with a Scottish connection. Chapter three in Dr. Jane Carswell takes the reader to Flora Macdonald College and to the required physical education class on the Highland Fling. 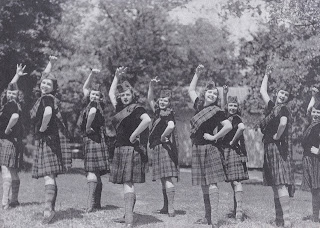 This photograph was on the back of a 1946 booklet detailing the college and its Scottish roots. No, Dr. Carswell isn't in the photograph, but she had a kilt sewn by her mother to regulations for freshmen entering their first year. Color and patterns were individual to classes and unique to them through the entire four years (in an all-girl school, by the way). Once when Dr. Carswell was in her seventies, she amazed on-lookers when she broke into a full flung Highland Fling!

Now to read the rest of the Outlander story. I can't wait.

Gretchen
Posted by Gretchen Griffith at 9:13 AM 2 comments:

Down in the Valley

Happy Valley sounds like a blissful spot, doesn't it? Toss in people from all across the world and some fiddles and clogs, and you have the most happy spot on earth, at least for a few days of hard earned Labor Day relaxation. 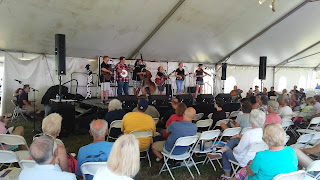 Saturday was competition day. Singing. Picking. Clogging. Strumming. Solo. Groups. All day. With finalists facing off in the evening.

Also with ample activities to entertain the children ranging from barn fun, milking a cow, to playing in the river that flows down in the valley...and even a parade. 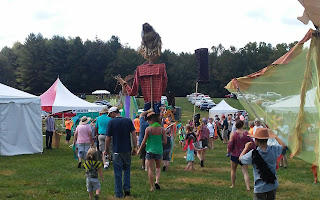 This valley reeks with history. Tom Dooley. Daniel Boone. Captain William Lenoir. Three of my books take place down in the valley: Wheels and Moonshine, you can imagine for yourself the goin's on in this book that was such a delight to write; Racing On and Off the Road  in Caldwell County, the valley through which many a drag race thundered in the early morning hours decades ago; and Fly Fishermen of Caldwell County, the life stories of men on the streams that feed into the river these children played in this weekend. Okay, so four books. Dr. Jane Carswell lived there in the valley, too.

Sunday's lineup was chocked full of bluegrass artists singing their hearts out and drawing an appreciative crowd. Even the late afternoon rain shower didn't dampen the enthusiasm. The festival ended on Sunday, but Monday, a local gem of a tiny restaurant held its follow up response by hosting Liver Mush Monday. Proven fact: Breakfast tastes better with live bluegrass music in the background. 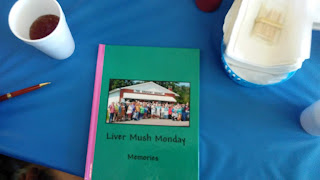 Again there was singing.
A bit of clogging.
Strumming.
Picking and grinning.
Lots of grinning.
Plain old valley fun! 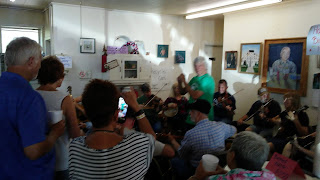 I hope your Labor Day was relaxing enough to sustain you through the weeks ahead.
Mine was.

Posted by Gretchen Griffith at 6:36 AM No comments: