Spiders I have known

I'm not too big on spiders. I avoid them at all cost, including having the bug man show up yesterday and spray. SOOOO when a dear friend and member of my critique group was writing a story about a spider, I wasn't all that excited. After all, who could get excited over a squirmy creature that appears nightly and weaves its lair in secret, only for me to walk through the next day. Not my favorite morning activity!
E.B. White pulled it off with his classic Charlotte's Web, but I couldn't imagine anyone else even attempting the challenge, much less accomplishing it.

I read her manuscript about a spider named Spivey from the first time she submitted it, through several revisions, until the book became a reality and let me proudly say, MY FRIEND SANDRA WARREN JUST PULLED IT OFF!!! Her previous children's book was about an alligator who thought differently than other alligators. This one carries that theme and introduces Spivey, a creative thinker who designs a web of her own making despite being ridiculed by the other spiders. I was already rooting for Spivey and her independent nature, but when I saw the finished product with its fantastic, over the top art work, I really felt that I knew Spivey and her feelings. Talk about pulling it off, artist SUSAN FITZGERALD JUST PULLED IT OFF!!!! 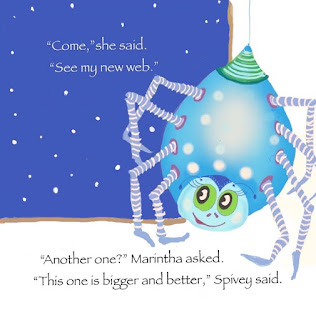 I can like spiders now, especially after seeing this lovely miss pictured above as she tells about her new web. I can't wait for you to read the book with its unexpected ending. Spoiler alert, it's a Christmas story that can be read any time of the year, Spivey's Web. 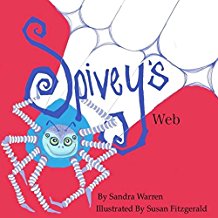 Available not only in print, but also in all kinds of ebook formats. Look for it on Amazon. Download it for your Christmas morning enjoyment.


Posted by Gretchen Griffith at 9:56 AM 2 comments: