Catch of the Day

When I began this blog several years ago I titled it Catch of the Day, despite the strong cautions from fellow authors. It was my attempt to brand myself as a "Self-Proclaimed Storycatcher" as I say on the home page of my website.

"It will give the reader the wrong impression," they said.

"Your blog is about history, not fishing," they said.

But I held firm to the title, steadfast in my decision to share my adventures in catching stories. I took a class on writing nonfiction and after submitting a chapter, received this comment from the teacher:

So I morphed into a being a storycatcher.

Fast forward five years and Ron Beane appears at my door with a box of manila folders in his hand. "Fly fishing," he begins.

And the fly fishing story begins. He had already caught most of the stories, he just didn't know what to do with them. Would I help him turn them into a book, he pleads.

And that is the rest of the story.

Except that, isn't it peculiar that my blog title is Catch of the Day? Odd things, coincidences. Maybe there's more to the cosmos than I first thought. 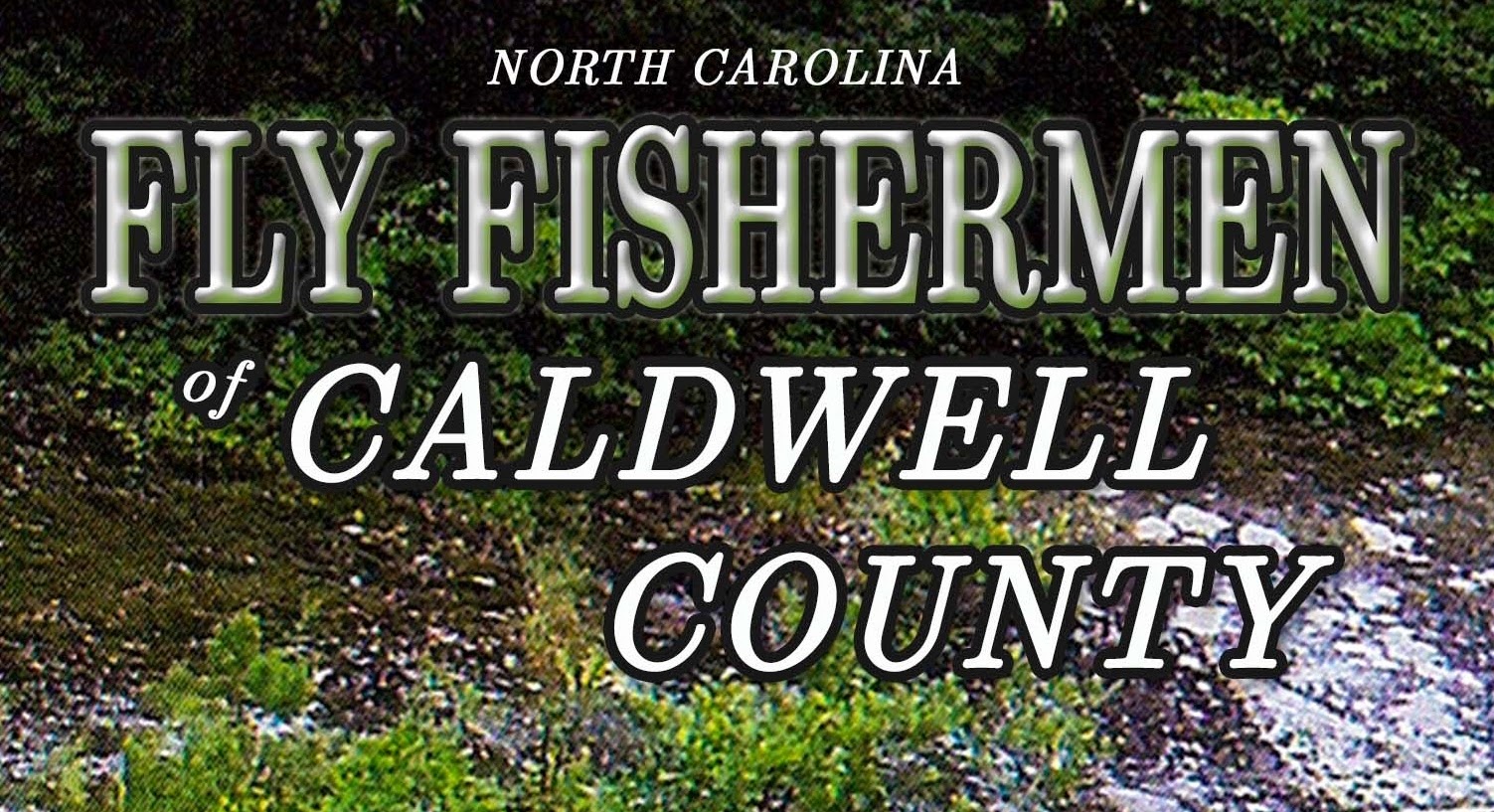 Posted by Gretchen Griffith at 7:10 AM No comments:

A Rooster in a Fly Fishing Book!

"Write what you know," my high school writing teacher told me over and over. "How can you possibly write what you don't know anything about?"

Decades later, I have an answer for her. Easy. You learn.

Case in point, fly fishing. Before I began this project I knew nothing about fly fishing beyond a pole and a creek. My misunderstandings about the sport far exceeded my knowledge. In fact, if I were to make a list of books I would write one day, fly fishing would be so far down the list I wouldn't work my way to it until I turned two hundred years old. Me and Methuselah.

Reality has a way of laughing, though. And I've laughed a lot these past few months.

To show you how much I didn't know about fly fishing, I thought it peculiar that one man submitted a picture of a rooster to include in the book.
As beautiful and majestic as he is, he didn't make the final cut, so I'm posting him here, to give him his proper due. He's probably dead now anyway, a victim of circumstances. And no, it's not necessarily the elegant colorful feathers the man tying the fly is needing. It's the hackles, those neck feathers.

This fly fishing book is not a "how-to" book. It is a book of life stories of fishermen of the North Carolina county where I live, twenty-eight fly fishermen to be exact. Each man wrote his own chapter. The family of deceased fishermen wrote their chapters. Ron Beane and I complied them into a magnificent book of real life, introducing the reader to not only the sport of fly fishing, but the men behind the rod.

As I worked through the submissions I ran across several rooster references and gradually I became aware of why this rooster's picture showed up at my doorstep. From a fisherman's family:


Or from a fisherman himself:
Or from another fisherman, as part of an interview I did with him, a picture I took of his hackle jar. 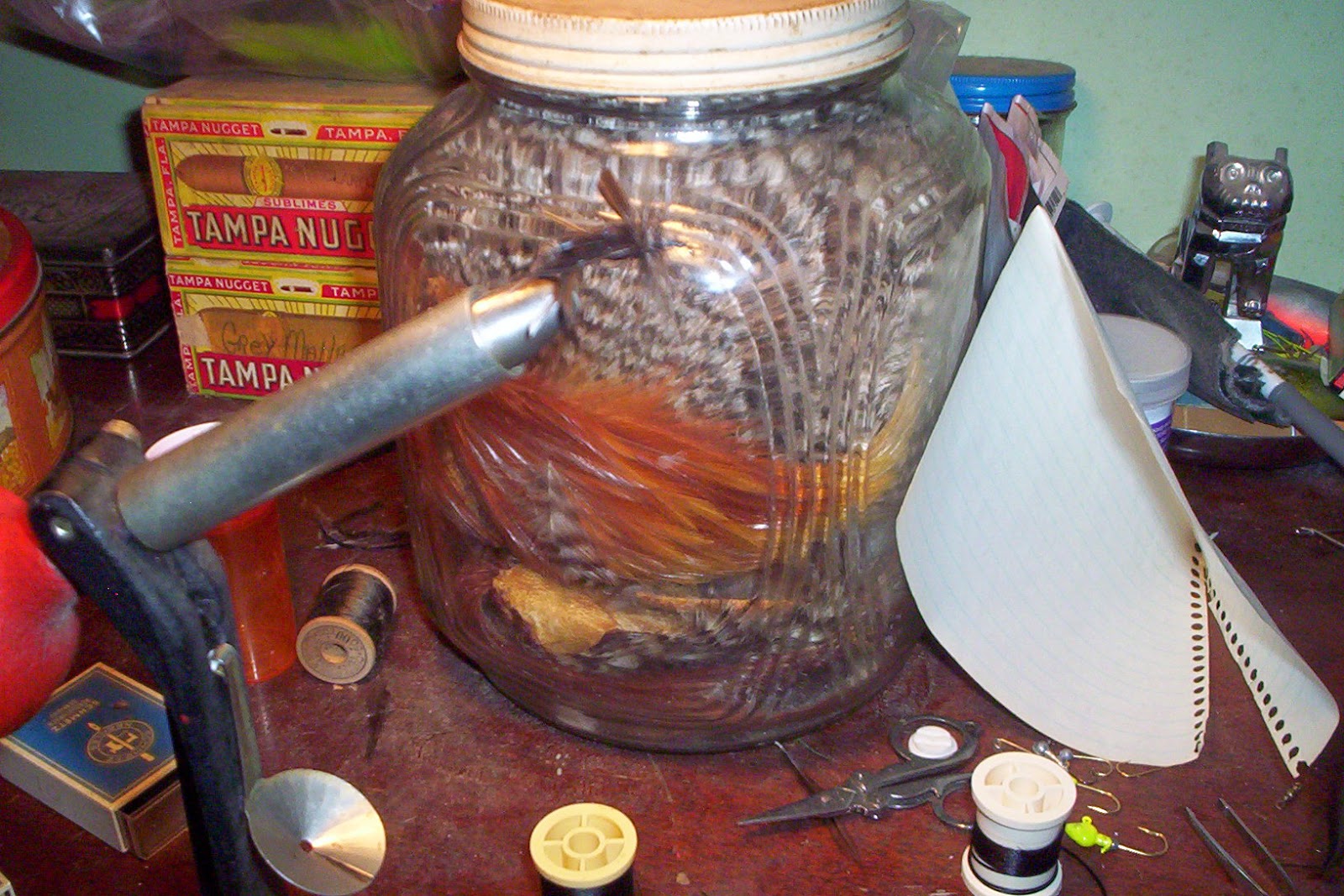 And his comment, that I sort of, kind of, maybe understand, but still wrote about:
I'm still in the process of learning about fly fishing. One thing I've learned beyond why a rooster picture was in the mix, it is possible to write what you don't know as long as the information is authentic. And in this book, YES. The information is as authentic as it gets.


Posted by Gretchen Griffith at 7:00 AM No comments:

In case you haven't noticed, I've changed my feature photo from the schoolhouse to the creek. When I first began this blog, I was deep into the process of writing a book about Pilot Mountain School, so naturally I used the schoolhouse as the opening shot of my blog.

Today I'm up the creek, Wilson Creek to be exact. Isn't it beautiful! This photograph was taken by Bill Kincaid and now graces not only the top of my blog, but also the back cover of my upcoming book, the one that should be on the market within a month, the one that I would have never imagined I would be a part of.

More on that in future posts. Today's is about Wilson Creek, with another view in this photograph by Gene Swanson: 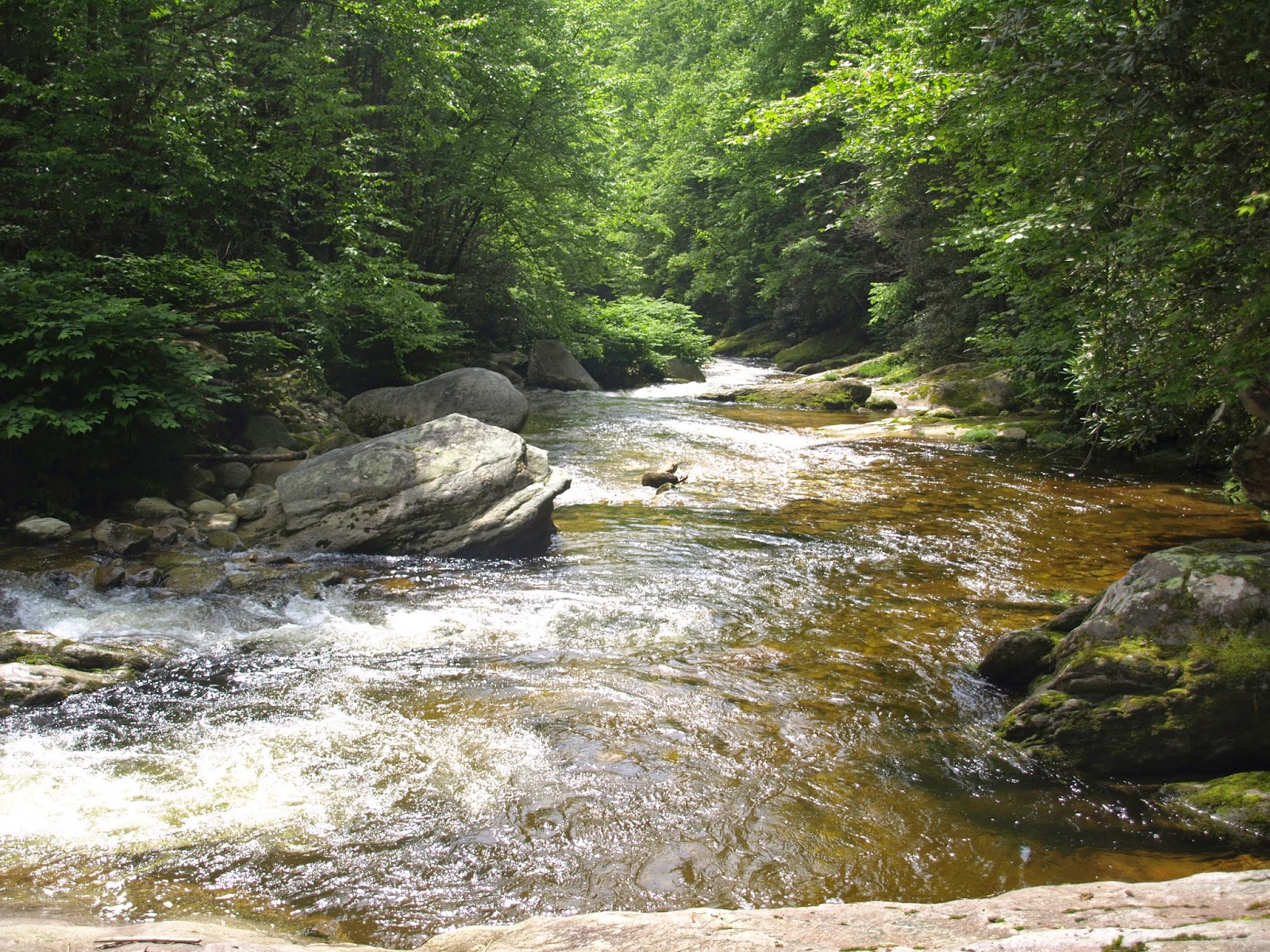 According to the Friends of Wilson Creek website, the creek has a storied past through floods and fires, and even industrial development that failed due to those floods and fires. In the end, it defied development. It remains what you see in this photograph.

A group of concerned citizens led a successful campaign to have it designated as a Wild and Scenic River. One of them is the co-author of our upcoming book, Mr. Ron Beane. Here's an excerpt from a chapter in the book:

Oh, and here's an excerpt from the back cover (Wilson Creek in the background):

I can't wait to show you the rest of the book.

Greetings to my readers on the weekend of what I consider the most sacred of holy days, Easter.

I send Christmas cards. I send Valentines. I send birthday greetings via facebook. But I don't remember ever sending an Easter card. So consider it done. Today. Via this blog. And thanks to my husband's grandfather, who in 1917 sent this card to his Aunt Agnes: 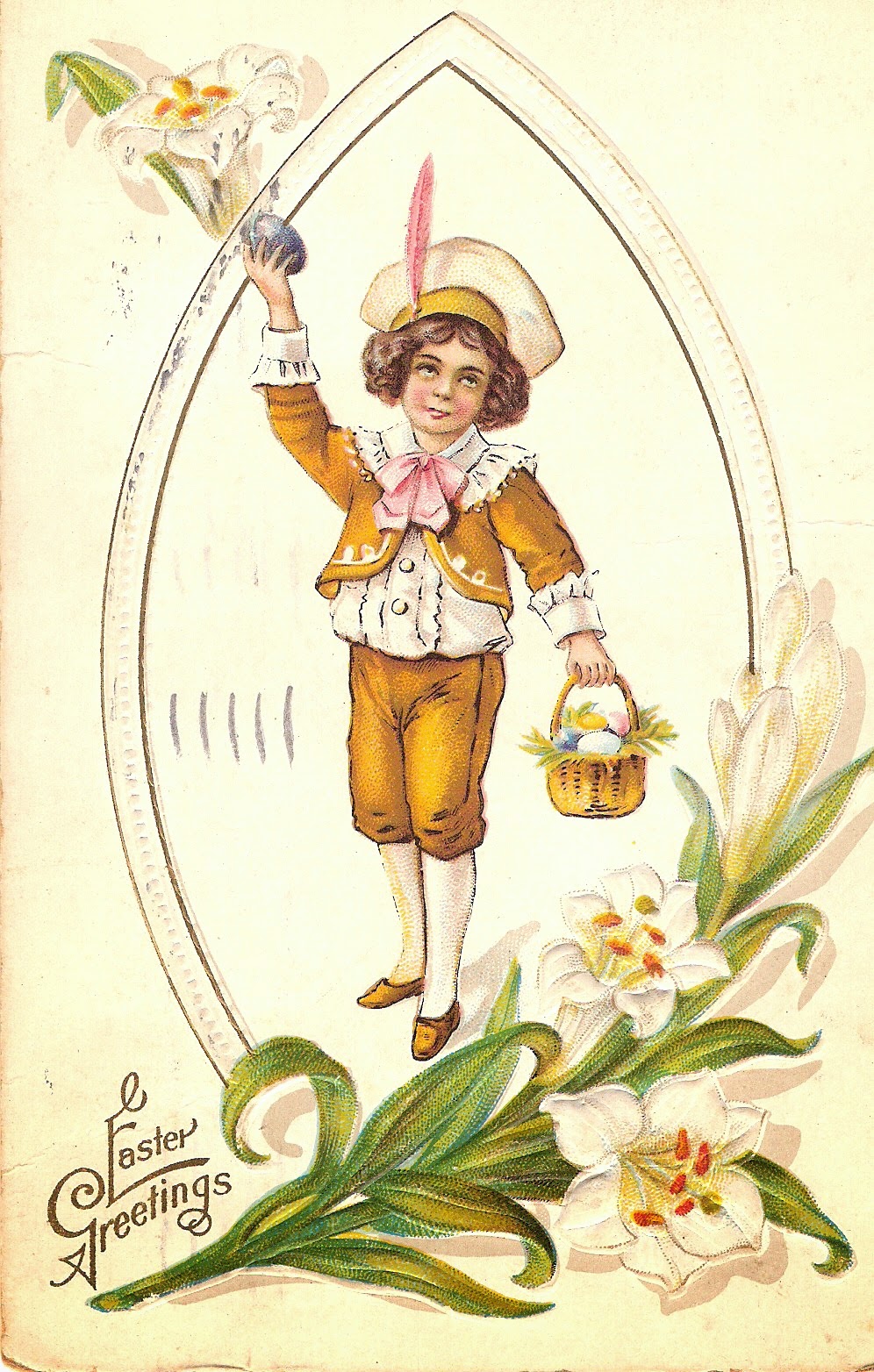 This would be an Easter greeting blast from the past. After all, the true joy of Easter still holds strong almost a hundred years after this penny postcard was lovingly sent, so why not recycle to you.

This postcard fell into my hands, along with many, many more, because in the process of cleaning grandpa's house (I've mentioned that in previous blogs) we are also cleaning great-grandpa's house, the house that has not been touched for decades, the house where nothing (and I do mean nothing) was discarded through the ages. For days now, I have been existing in a time capsule. I've uncovered farmer's almanacs that have not seen the light of day since the early forties. I've held political letters begging for votes (and contributions) from pre-World War II candidates, and Viet Nam era candidates.

It's been rough being a history buff on a deadline. All I want to do is read, read, read. That is impossible, so instead I put things in the "Don't you dare throw that away" pile and dig into the next drawer. 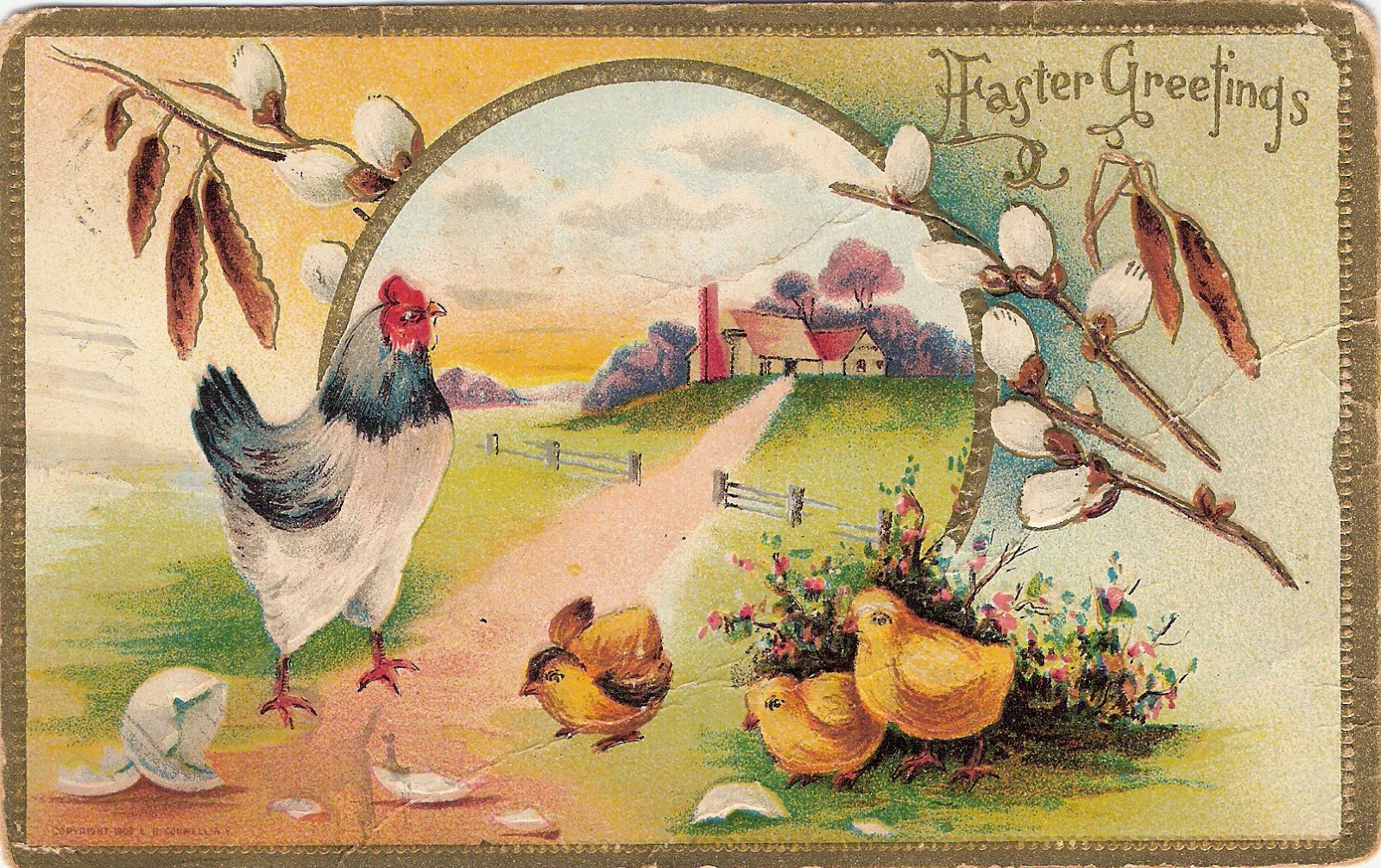 I can't read the postmark date on this card, but I can read the sentiment behind the greeting to Agnes and the invitation to "Come up here for Easter." A hundred years of Easters have come and gone since Agnes reached in her mailbox on the side of that country road and pulled out this card from her nephew. I know she was as thrilled to find it as I was.

I hope your holy days are blessed.


Posted by Gretchen Griffith at 6:27 AM 7 comments: