I watch the ads on the television set for Father's Day gifts, smiling fathers cooking in the backyard, busy fathers playing catch, fishing.

I walk through the card aisle and see the possibilities, humorous, sappy, nail-on-the-head perfect.

Madison Avenue makes it all seem so peaceful and rewarding, and it is. My husband proved that over and over. I'm thrilled with the card I selected for him this year.

But now I want to direct your attention to this man:
Isn't he a handsome dude! He's my father and I'm guessing this snapshot of him was taken before I even came into the picture. There's no date on the back, but given his suit coat and the location in Pennsylvania at his mother's, and the lack of color, I can sort of date it to the early 1940's. He was born in 1912, so he would have been in his thirties.

I would love to run out and purchase a barbecue grill to give him this year, but it's too late. He died in 1981. What he's missed since then, I can't begin to list. Fortunately, he knew his grandchildren. They meant the world to him, yet he missed watching them grow up. He missed taking my mother on trips abroad, although they did their fair share. He missed new cars and talking politics and Mad Magazine issues.

He was a tinkerer. Our basement was crammed with his cars and his machines and his latest projects. Video games were just appearing on the scene in his final years. He connected a table tennis video game to an old television set and played it for hours. I can only imagine his reaction to the games now. I know he would have them ready to play when his grandchildren came over. If he'd only had the chance.

I've had thirty some years of not buying a card for him. That's the way life goes, I suppose, but even then, one thing remains. I love him no less than I did that horrible day my mother called with the news of his death. In fact, as my children grew and my grandchildren grew, I've grown to love him more.

Posted by Gretchen Griffith at 7:30 AM 2 comments:

So here I am on a Saturday morning, doing what I need to do to get my Crump Field Baseball project finished. Much of my research is complete and I'm in the fact checking mode today, not a pleasant task for a researcher like me. Don't get me wrong, I LOVE researching. I LOVE finding all kinds of interesting facts, which is where the unpleasantness fits in. I find interesting facts NOT related to what I need, but hey, I think, maybe some day. So I spend time dabbling. Fun, but not productive.

Which is why, in writing a rough draft for a 1950's era baseball field out in the foothills of North Carolina's Blue Ridge Mountains, I end up spending over an hour (or three) working on something that will end up being one sentence long, maybe just one phrase long.

The original Crump (ancestor to the Crump field Crumps) arrived in America as Johann Krumm, a Hessian soldier in the service of the British Army, a paid mercenary. His early military record is easy to trace.


Remember this famous picture by Emanuel Leutz, Washington Crossing the Delaware? Well, Johann Krumm was waiting on the other side, maybe not aware that he was waiting since this was a surprise attack, but still, being there counts as waiting.

He was captured and according to ancestry records, held prisoner until he was used as a pawn in a prisoner exchange and sent to Georgia, where he left the British side and fled to Charlotte, North Carolina. Mecklenburg. German. Of course he went there. That's where he found a German settlement. He joined the American Army, fought for them. I know because I found his military record. He was captured again, this time by the British he once fought alongside. He was released. Again. And according to the family records, joined up with a guerrilla style warfare group under the leadership of Francis Marion. The Swamp Fox. Only thing is, that fact I can't find.

That picture might show what life was like with this historical figure, but here's the Swamp Fox I remember from growing up in the fifties and sixties:
It was a TV show starring Leslie Nielsen, and as my brother and I watched faithfully, my mother would again (and again and again) tell the story of how she got her name. Frances. Her brother, Marion. Her ancestor fought with Francis Marion in the swamps of South Carolina, she said. I never doubted. I never questioned the fact that we were from Pennsylvania and he was a leader local to South Carolina. I never asked which ancestor.

Searching and researching for this Crump ancestor to verify his story, I ran across a list of Marion's Brigade, compiled by South Carolina historian Victoria Proctor. No Crump, no Crumm nor Krumm, nor any spelling variation I've run across. A little air went out of my balloon. Okay, so there is a statement that "formal muster rolls were virtually non-existent." This list relied on secondary sources. Would family lore qualify?

So today I looked for family last names that could be even remotely connected to me. There it was. Fleming. Eight of them listed. Someday I'll check the connection. Not today because today I'm working on researching other things. But maybe some day...

Gretchen
Posted by Gretchen Griffith at 9:57 AM No comments:

I've been concentrating so much on the Fly Fishing book that I neglected to report on another of my good publishing news. In the June 2015 issue of Highlights for Children, you will find an article I wrote. Page 32. 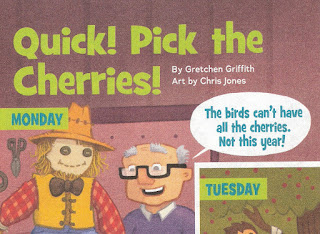 It's a short story I based on my father-in-law’s yearly battle with the birds over the cherries in the trees, and my son’s attempts to help. It was published in Highlights for Children June, 2015 issue. 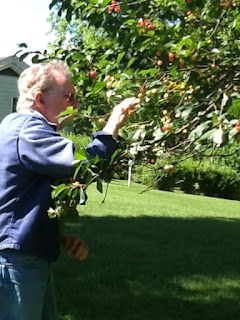 Here's Grandpa Griffith in a snapshot my niece took him while he was doing what he loved,
picking cherries.

And now the illustration in the magazine:

Thank you, artist Chris Jones, for your interpretation of Grandpa. You nailed it! 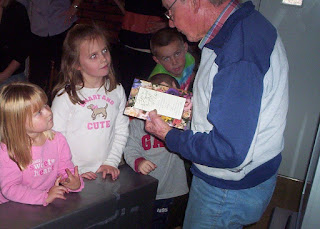 He loved being Great-grandpa!

This wonderful man was a part of the greatest generation. I'm thrilled my children and grandchildren met him and learned at his feet.

Posted by Gretchen Griffith at 7:12 AM No comments: