As we start into this new 2020 year and dust off the leftover crumbs of the 2019 past, I'm taking with me a little reminder-to-self of the importance of character, not only in my daily interactions with others, but in my recording of history. How I write my books shows as much about my character as that of the person I'm writing about. 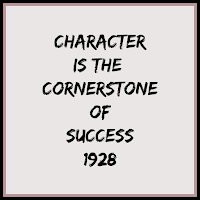 Last week I made a delightful Christmas visit to my mother's cousin, Lorraine. She is ninety-two years old and still the lively, active subject of our book about her, Called to the Mountains.

In the midst of our little two-person celebration, she dragged out a photograph she found while scrounging through her many stacks of photographs. "Could you help me figure out what it says on the banner?"

A history mystery! A challenge. 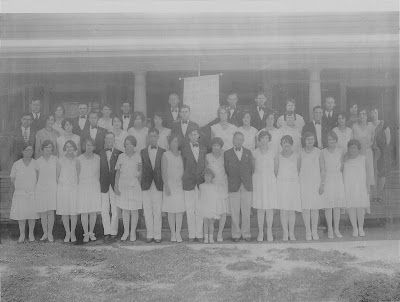 She brought out a magnifying glass and we at least were able to decipher the date, 1928. Despite all efforts, we were unable to go further. "Who are these people?" I asked. They appeared to be college aged, all dressed similarly in Sunday best. Or maybe graduation best. She had no idea, not even an inkling of where she got the picture.

"Could I take this with me and I'll scan it and work with it? Maybe then we will figure it out." Oh, the joys of modern technology when a puzzle is upon me! 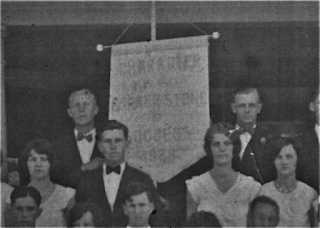 Between the zooming in and the color clarity manipulation, the results revealed enough for me to call Lorraine and announce the words I found on the banner: Character is the Cornerstone of Success 1928. Wow. The past speaks! Lorraine might be ninety-two years old, but her thirst for knowledge has not dimmed. She wanted to know more, and so did I.

I searched the internet to see who originated that saying, as it sounded like an adage worth claiming to me. The only direct quote I found with those exact words was on a fortune cookie, and that doesn't match the 1928 roaring twenties of this picture!

Next I went to the reverse image search engine called Tin Eye that I have used several times when I needed to locate the origins of photos I wanted to use in my books.

I'd like to say I found more information, but I didn't. The trail is cold for the time being, but maybe, just maybe, I will hit a clue somewhere down the 2020 vision line and discover more about it.

Meanwhile I can only look at the individuals in this picture and wonder how life turned out for them. They would be over a hundred years old if any of them survived into this new century. This was 1928, when the world was on the cusp of a Great Depression. Did any of them succumb to their own depression and jump off a bridge to end it all just one year after posing for this photograph? Who among them were killed in the Second World War? Who had children and grandchildren and great-grandchildren walking beside us now? Which ones took that Character is...banner to heart and made such a tremendous success of themselves that we could write glowing reports about them today?

The people in this picture were frozen in time under a banner heralding the key to success. Their life was still a promise of yet to come days. The question I can't help but ask, when we take our own character is photograph on January 1, 2020, what will people in ninety years wonder about us?