Merry Christmas to us all

A message that never gets old, Christmas joy. 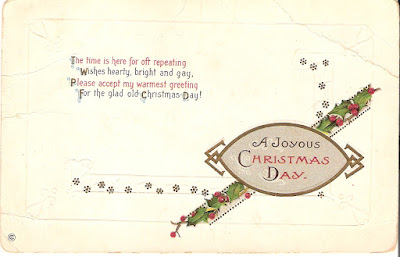 Have a Blessed Christmas Day

This week I had the pleasure of eating supper with a group of exchange students from around the world. The discussion eventually got around to Christmas and while some of them were from cultures where Christmas is not celebrated, they all were aware before they arrived of Christmas and Santa and decorations and candy canes. What was surprising to them was the length of the Christmas season in America, starting at Halloween and stretching for nearly two months.

It wasn't that way when I was growing up in the fifties and sixties. The week before Christmas we chopped down a tree from our field and brought it in. We decorated it and watered it and put presents under it on Christmas Eve, presents we had purchased the week of Christmas.

Yet I found evidence that Christmas lasted even longer than that. It was in a penny postcard with no year date, only stamped April 14 at six pm. It was in a series of postcards from the early 1900's, so I know it's around a hundred years old. 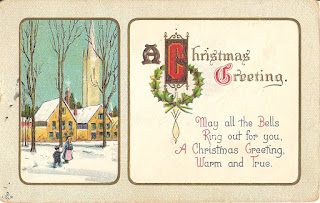 Half of the back was the address. Name, town and state only. No street listed. No zip. The message side explained the reason for the April date. The sender had run out of penny post cards, so he was using this one to send a hello. Nothing special, just hello. Just a Christmas Greeting in April.

How special. Maybe it's true that the true joy of Christmas lasts not only year round, but a hundred years later.

Just in case you missed the sentiment, here's another undated but elegantly simple penny postcard, no year, but definitely in December.

So let the naysayers argue that Christmas is getting too long nowadays. It's never too long for spreading the joy.

A friend of mine just posted about one of my books on her Grateful Writer blog,
Thanks for the mention, Sandra Warren.

Christmas is not all that far away and her holiday post reminded me of the tradition we have to bring out something as simple as an ornament from our past, if nothing else but to make us feel more like we're home. Or to make our newest home, feel like home. Reading what she wrote will brighten a rainy depressing day like today, so click on over.

I haven't started tree trimming for this season, focusing instead on an outdoor Christmas Trail drama my church presents yearly. We opened last Sunday evening in the rain, not a pleasant task, but we did it! Below is a photograph from that evening. If you are around the western North Carolina area December 4 - 6, drop by Lelia Tuttle Memorial Park, 4010 Hartland Road, Lenoir for a walk through the woods and experience the Biblical Christmas story. Groups depart the picnic shelter every seven minutes starting at 6:30. Dress warmly.

This picture shows our church chapel reconstructed in 2007 using logs from our 1825 church building. It's a bit of the past that makes me feel like I've found a home whenever I sit on the handmade pine benches. I feel a connection.

Isn't that what we're all after? Connecting, whether it's to a moment from our past or to the love of our present. Connecting, so that no matter where we are, we still have a bit of home with us.