I'm taking a break from writing and rewriting and revising (whew!) and I'm attending a Bluegrass Festival near my home. Click here and see what Merlefest is all about, and then come on over and join us. It's not too late. Last night I sang along with Randy Travis, me and probably 20,000 others. Music was our common bond.

﻿﻿﻿﻿﻿﻿﻿﻿﻿﻿﻿﻿﻿﻿﻿﻿
In the afternoon, I attended one session by a local group, The Neighbors. They could be my neighbors, your neighbors. Music makes them universal neighbors.
Bluegrass music was a part of Pilot Mountain School, too, the children's heritage. One former student told me about the man who lived across from the school. Every day he would sit on his front porch after lunch and play the banjo. When the teacher opened the windows on those hot, stuffy days, the children heard the music. They couldn't work, supposedly. Finally the teacher adjusted her schedule. The class returned to the room immediately after lunch. As soon as the afternoon concert began, they went outside to play, but many of them chose instead to sit on the grassy bank and listen. This was a true lesson in music appreciation.

Easter Traditions in the South

Yesterday I watched the sun rise with fellow worshipers at the edge of a cemetery. We listened to the birds waken from their night's rest and we sang songs of praise. There's nothing quite like welcoming good news at the break of day.

I felt a connection to worshipers across the globe who, like me, were looking for the light of the sun to break through the darkness when the preacher could announce, "The Lord is risen," and we could respond, "The Lord is risen indeed!" This year, mainly because of this Pilot Mountain project, I also felt a deep connection to Easter mornings past and the throngs of people who, generation after generation, also stood vigil.

Tradition is a comfort to me. With the chaos of newness and uncertainty, rituals bring me a reassurance that the world goes on.

Did the masses across the globe smell country ham cooking in their church fellowship hall while they stood outside? I did. Did they eat scrambled eggs and grits and red eye gravy and salty ham biscuits when the sunrise service ended? I did. Did they watch excited children in their Easter finery dart through dewy grass searching for Easter eggs? I did.

Easter egg hunts were a tradition at Pilot Mountain School, only these eggs weren't the plastic dollar store dozen stuffed with candy treats. They were real, hard boiled, dyed at home eggs and brought to school in baskets. These eggs the teachers counted before they hid them to make sure they wouldn't smell the forgotten egg two weeks later.

Plastic eggs, real eggs. It's the reassurance to the children that counts. The world goes on.

Gretchen
Posted by Gretchen Griffith at 9:11 AM 2 comments:

It was time for a little reward.

I knew my husband and I would be headed out to New Mexico to visit our daughter and son-in-law in Taos last week, so I was determined to finish the Pilot Mountain Schoolhouse rough draft before I set foot on the plane. Mission accomplished. I left all my cares behind and exchanged one set of mountains for the other, the South Mountains of North Carolina for Taos Mountains South. Be sure to click on the picture and see the close up. This is what my daughter gets to see every day!


﻿
﻿ Even when I was there, I couldn't get escape thinking about the South Mountains here in North Carolina. This week we went in one day from white snow caps of New Mexico back to the white dogwood blooms in the Carolinas. There is no comparison. Each is beyond beautiful.

My challenge now is to make the Pilot Mountain Schoolhouse story appeal to readers from each culture. I've looked at my rough draft through Appalachian eyes, but maybe now it's time to look at it through New Mexican eyes, or New England eyes, or downtown Chicago eyes. What culture shock would I experience? What values would I find in common? What about the lessons learned?

Vacation reward time is over. Revision lies ahead and I'm so ready.

The old "in like a lion, out like a lamb" adage is a little out of kilter this month. Outside the wind roars like the lion it pretends to be and it's already April.

Still, there is a glimmer of spring. Thank you Judy Brittain for this picture of spring breaking out at Pilot Mountain School. 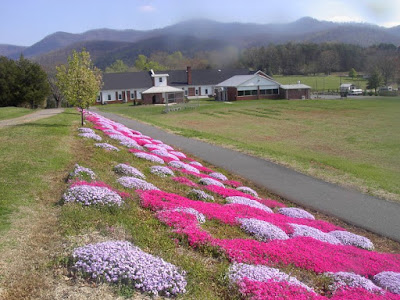 This was taken in the back of the school, a sight not many people are privileged to view. In the distance are the South Mountains that the children saw every day, the soft, rolling ridge of what they called "humps, knobs and tops."

Each morning back in the 1940's, the classes would line up outside to march in. The door they entered is obscured by the tree, but it is still there on the left. The principal would greet the children and give a little pep talk about doing their best. Then she would sweep her arm toward those mountains and say, "Breathe that fresh mountain air." They would. Every day. And they still remember to breathe that fresh mountain air in appreciation.

Don't you wish you could be right there, right now, in this moment?

The Lighter Side of the Moon(shine)

Since today is April first, to get into the spirit of foolishness and such, I thought I’d tell about some of the more humorous moonshine stories I’ve caught in my net. A rough life can have its comedic side, after all.

The children in the school were well aware of the revenuers and their never ending quest to shut down the illegal liquor business that was booming in the valley. They accepted it as a part of life, so what they witnessed was often taken in a spirit of "that's how it goes."

One day in the 1950’s, the calm and quiet of the classroom was interrupted by the sound of a huge explosion not all that far from the school. The students looked at each fully aware of what was going on. One student shrugged his shoulders and vocalized what everyone was thinking, “Well, there goes my father’s business.”

Another time the students had just arrived on the playground when the law went down the valley, flashing lights, siren. By the end of the recess, the law came up the valley with the guilty party in the back seat and a huge metal still hanging out of the trunk. Several students recognized him and waved at him as he went by. He waved back.

A first grade teacher told about the time the children were having the social studies lesson of community helpers and what fathers do for a living. One boy said, “My father makes whiskey for a living.” A surprised little girl sitting next to him said, “No, my father works for his father and they make liquor, not whiskey.”

Each fall on the first day of school the parents had to fill in a form with information about their families including contact numbers and other necessary emergency details. One question was about employment. Never did the response actually say “bootlegger.” Usually the word was “farmer” and that was the truth. They had to grow corn.

Gretchen
Posted by Gretchen Griffith at 7:21 AM 2 comments: