Leap Day Thoughts Bouncing Around in My Head

I'm not sure if that's the customary greeting for a day like today, but since Leap Day comes but once every four years, I thought I'd get into the spirit and wish you happy leaping! Meanwhile I'll muse a tiny bit about leaping and my books.

Since the last leap year in 2016, I published a book with Neil Armstrong's declaration upon landing on the moon, "That's one small step for man, one giant leap for mankind." I've been to classrooms in two states with this book and fourth graders could recite that sentence. It's part of their culture. Yay for teachers who teach modern history! Makes me want to leap for joy.

There are also Leaps of Faith throughout my books, as in all great life stories. My mother's cousin, Lorraine Frese, took a giant leap of faith when she answered God's call to upend her life and move to the Salvation Army's Mountain Mission in western North Carolina. I wrote about her in 2013, nearly two leaps ago.

Dr. Jane Carswell likewise took that same leap of faith to move to eastern Kentucky and serve the people in a coal mining town as a medical doctor. Her biography is a book I've published since last leap year. I've published other books since 2016 that are also filled with life stories of men who took the leap of faith and went on to great (and ordinary, but necessary) accomplishments.

With leap year comes election year, a topic I'm even more familiar with as I'm working on a new project with a retired politician. I am thinking in chunks of election cycles as I structure his memoir, which just happen to also be in chunks of leap years.

Lots can happen in a quantum leap!

I'm friends on facebook with people celebrating birthdays on February 29. They laugh that they are younger than others since they have fewer notches on their sticks. Do they store their fun and games and blow them all in a once upon a four year day? I wonder if parents anticipating births this year will induce labor a day ahead, just in case, or if they will induce on leap day, just to be special.

I can't help but also wonder what will happen between now and the next leap of year. Will I have other books to share with the world? Will I check off my complete bucket list and be searching for more?

My wish for everyone is that we all take that leap of faith necessary to make the world a better place. Without leapers, where would we be! I hope in 2024 my blog title will be

"My Leap of Faith Was So Worth It!"

Posted by Gretchen Griffith at 7:00 AM No comments:

My mother has been on my thoughts lately, so for no special reason, I'm writing about her today. She died nearly two decades ago, but she never really left me. A fashion piece, she was not, although in my favorite picture of her, she appears quite stylish. 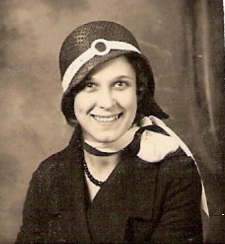 It's not her birthday, although she'd be a hundred and nine this coming November, so that counts for something. It's no longer Valentine's Day. She was too practical and would cringe whenever my father brought her flowers. She was a product of the Great Depression, after all, and spending money on such an extravagance went against her nature. It's not Mother's Day, the one day she did allow flowers, on corsages, white orchid for her to wear to church in memory of her mother, red rose for me because, as tradition dictated, girls whose mothers were still living wore red flowers in their honor. We only went out to eat at a restaurant once a year. Mother's Day. Even when we traveled we did not eat at a restaurant. We packed a meal or we brought out the Coleman stove and cooked beside the wayside picnic table on site.

She had gone on a cross country adventure of her own aboard a tour bus before World War II and before air conditioning. Each evening the bus stopped and unloaded cots for the women to sleep under the stars. She had peanut butter and jelly sandwiches every single day for the three week duration of this adventure, consequently she never served me a peanut butter and jelly sandwich. Never. I had no idea they existed until I was further up in age.

I might have been deprived of a pb&j childhood, but I wasn't deprived of the wanderlust gene that I was fortunate enough to receive from both my mother and my father. They traveled around the United States dragging my brother and me into the most obscure museums ever invented. When they both retired, they traipsed across Europe visiting places they never imagined they would see.

Their life long goal was to see Alaska. That dream ended when my father passed away unexpectedly, so my husband and I picked up the dream and drove the Al-Can highway in his honor, dragging our two children to the most obscure museums ever invented. A few years later my mother accompanied me on a trip to Alaska where we traveled by state ferry instead of a luxurious ship chocked full of glamorous delights.

She wanted to see more of the world, so she promised her grandchildren she would take each one of them to any place on the face of the earth as long as she had not been there before, which narrowed the list a great deal. Her oldest grandchild, my niece, picked Ireland, and off they went. My nephew chose Greece. My daughter picked the Netherlands. And my son, the baby of the four, chose a safari in Africa.

Last fall my cell phone rang. My younger granddaughter was on the other line. "Granny Gretchen," she started. "You know how Daddy's grandma took him to Africa and Auntie Jenny to Holland?"

Where she heard the story, I didn't know, but "Yes."

"When are you going to do that for us?"

Guess what is in my future! Thanks, Mom. You're the greatest ever. I was blessed.

Gretchen
Posted by Gretchen Griffith at 7:00 AM 2 comments: