In this age of constant blasting technology and interfering distractions, for one brief interlude of time, every fourth grade child in our western North Carolina Caldwell County puts all else aside and reads the same book, works on similar activities and then meets the author. What a concept! It's called the Little Read. Here's how the superintendent of schools explains it:


For the second year in a row, I was fortunate enough to be that author. Last year it was with my When Christmas Feels Like Home, this year with my Back on Earth: When Men First Landed on the Moon.

I equate my recent author visits with fourth graders to being a grandmother. You get to enjoy all the good things about children, and then pass them back! Enjoy I did. The children were engaged. They asked appropriate, thought provoking questions. They responded to my cues.

I almost wanted to be their forever teacher. Almost, except that I do love what I am doing now, writing. Yet during those brief encounters I remembered the joy of children in the act of learning. I met exciting teacher who tapped into that joy. I met energetic principals who beamed when their students responded to me in polite, sometimes humorous ways. I watched children file into the gym, or media center, or commons area, whichever spot these schools offered to collect children ready to learn. I watched them file out, orderly, well mannered, where invariably, a few dared to break rank and hug me or ask me a one-on-one question. Those are the moments a former teacher lives for. Thank you, Caldwell County, for entrusting me with the minds of your precious children. 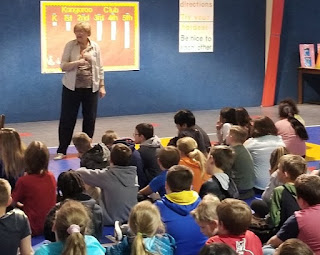 Most of all, I got my message across: Learn about the past (in this case, Apollo Eleven) by reading about it, writing about it, and talking to those of us in a different generation who were witnesses. We have stories to tell.

Gretchen
Posted by Gretchen Griffith at 10:37 AM No comments:

Adding a New Person to the Household

My husband and I have been blessed these past two weeks to have a special guest living with us, temporarily, if she has anything to say about it. She is my mother's ninety-two year old cousin, the last of my family's greatest generation, and is taking a respite from a recent hospitalization. She is also the main character of one of my books, Called to the Mountain: The Story of Jean L. Frese. Here Lorraine is about fifty years ago, when she first joined the Salvation Army. 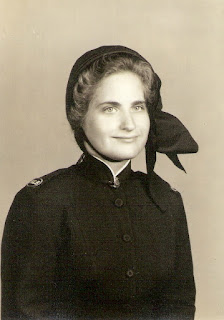 Adapting to living with an extra person in our home has been a challenge and a blessing both. Odd thing, the Old Testament reading for tomorrow at the church we attend, Littlejohn United Methodist, comes from Isaiah 55. Verse eight, I can relate to:


We've adjusted, even though her ways are not always my ways. Lorraine was raised by my grandmother, who also raised my mother, so logically, many of her ways were also my mother's ways. And also a few of my ways, like doing the dishes a certain way. Like serving particular meals that, like her, I grew up also eating.

I've enjoyed having her here and will miss her when, if things go as planned, she returns to her own home next Monday afternoon. She has entertained me with story after story of the way things were in the mountains of western North Carolina back when she first arrived from downtown Pittsburgh, Pennsylvania as a new recruit to the Mountain Mission of the Salvation Army. Many of those stories she had told me before when we wrote the book of her memoirs. Others were new to me, and I admonished her for not telling them in time for publication.

She had a hard time adjusting to Appalachian/Smoky Mountain culture and speech. She had moved to a foreign land, at least she thought. She couldn't understand their ways or their thoughts. They couldn't understand hers. She said they did a lot of hand signs at first.

Like when she visited a lady in the hospital who said she couldn't wait to get home to sleep in her own tick. She asked around. Straw ticking mattresses were standard for mountain homes of the time.

Like when another lady ran to get her camera to "strike a picture" of her since she was so different.

Like when they talked about people being lawed rather than sued.

Like when they dropped the endings of their verbs and went goin, or doin, or sleepin.

Like when the went to a far, but really were going to a fire. Or a county fair.

Or like when people told her things were up air, but actually up there.

We had no issues like that. We've had a wonderful time, cousin to first cousin once removed. Age gap or not, we've had laughs and frets when her illness set her back a time or two. And when the time comes to take her home, I'll be sad. Adding this new (old) person to our household has been some fun time!