Music to Work By

This past weekend I attended a writing conference.

That one sentence is packed with hours and hours of back story, believe me. I soaked up more ideas and suggestions than I ever imagined possible. I compared notes with other writers. I signed copies of my books and in turn purchased other books for those authors to sign for me.


A good time was had by all.
(I just love that sentence! It seems so classical.)

Then I returned home and sat in front of my computer to apply all this new-found knowledge. The issue was not what did I learn that I can use. The issue for me was, where do I begin.

I'll start with music and the notes from the intensive revision workshop. Music, "it seems," awakens all parts of the brain, including both the creative and the logical. Music calms the brain, slows it, and the right music perks it back up. Make a play list of music to fit your manuscript, says the instructor. So, since working with a little surround sound makes perfectly good sense, I began delving, searching, surfing the web for the music that fits my writings.

I'm currently working on a project about a small town baseball field and no, I'm not going to run through an all day, YouTube marathon of Take Me Out to the Ballgame video selections.

But I can't help but revert back to the Lessons Learned manuscript and the many hours I sat before the computer, no background noises, typing, creating, researching and revising.

If only I had listened to "Cripple Creek," a Bluegrass favorite of the students there at Pilot Mountain School. There also was "Foggy Mountain Breakdown" during recess time, the banjo player picking on the front porch of the house across the road from the school. There were Irish jigs and reels. There were mandolins and guitars. There were jam sessions after hours, young people standing on the side, absorbing the music from their fathers and uncles and elders.

Not only did they play instruments, they sang. And sang. And sang. Bluegrass, yes, but also Gospel. One man reported that his fifth grade teacher required the class members to recite a Bible verse and sing a solo every Monday morning. He claims he sang "Onward Christian Soldiers" until he wore it out.

There was no formal music teacher until the late sixties. Music instruction (as everything else) came from the classroom teacher or from a parent or from a child, favorite selections, the songs by Stephen Foster.

They shared a songbook: 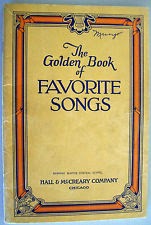 One child took the book home and learned the songs on the piano, came back the next day and taught it to the class.

In the fifties and sixties those same young people branched out. Rock and Roll seeped in, bringing Elvis and his pelvis. The Beatles arrived, bringing long hair and a new beat. Their parents didn't understand the attraction. Wasn't the old music good enough?

The community changed. The world changed. So what if the music changed, too? The heart was still there expressed in new lyrics and strange rhythms and the brain was calmed, perked back up, energized.

That's what music does.

Gretchen
Posted by Gretchen Griffith at 6:53 AM No comments:

I've been watching the Ken Burns series on The Roosevelts. Watching isn't exactly the word. It's too nondescript, because this history narrative has enthralled me. I checked to see if that's the word I really wanted to use and um, yes...enthralled, to hold spellbound, to captivate.

It's not as if I hadn't studied history. I have, although by the time my introduction to US history classes in high school and university arrived at the twentieth century, time was running out and we hurried through.

These episodes don't hurry. They show what I missed in those history classes, the family saga connected to the country where I live.

What I found most interesting is the verification of details I found during my research on the story of Pilot Mountain School. I saw this school's story unfold on television in the background of the Roosevelt story, Franklin's at least. He had polio. Chapter five, Pilot Mountain School children were quarantined due to the polio epidemic and their parents lived in constant fear that this horrid disease would strike their children next.
As president, FDR made a deal with the country, a New Deal, one designed to help the individuals suffering through the Great Depression no matter where they were, the South Mountains of North Carolina even. The REA, Rural Electrification Act, brought electric lines through the valley and to the proposed school site. The PWA and the WPA and the NYA, all economic recovery acts that brought jobs and institutions and training and yes, Pilot Mountain School. Partially funded by the PWA, the Public Works Administration, overseen by the WPA, the Works Progress Administration, and built by the boys of the NYA, National Youth Administration (boys age 15 and up because the men were called to war), this school would not have existed without some kind of deal, some kind of New Deal. It's there in chapter three of Lessons Learned, the results of the Roosevelt initiatives.

Chapter four, now that's another Roosevelt story, the World War II story and how the children and teachers of Pilot Mountain School supported the war effort and endured the hardships of the war reality. The Roosevelts: An Intimate History Check it out and as you watch, enthralled, think of this little school in the South Mountains of North Carolina.

Posted by Gretchen Griffith at 9:50 AM No comments: