What if Christmas wasn't all it was advertised to be.

What if at school the teachers and the cafeteria ladies smiled all day and said "Merry Christmas" all day and hugged the children a special hug right before they handed them the treat bags and then...then the children went home to a less than merry Christmas. All the mirth and cheerfulness and joy was at school.

Grown children remember the little things. They look back at Christmas past and realize Santa didn't visit everybody. They tell stories with tears brimming their eyes. And they work hard as adults to make sure it never happens to another child.

It takes a community to be a Santa.

Gretchen
Posted by Gretchen Griffith at 8:27 AM 2 comments:

To all the new faces and voices in my life that I have met through this Pilot Mountain Schoolhouse project, I send a most sincere wish for a joyous Christmas. Hearing your stories has brought a new dimension to my own story. I have learned more from you than I ever imagined possible when I first began the journey.

To my online Catch of the Day visitors that have wandered through the internet to read about this remarkable school, I thank you. Stay tuned next year. There's hundreds of catches ahead.

To all, may you find peace in the New Year.

The Best Gift to Give

I'm participating today in a road trip blog carnival. The idea is to connect with other bloggers through answers to a writing/reading related question posted on the YA Highway. I've lurked long enough through the weeks I've known about this. No longer. I want to share my answer with you.

Today's question: What gift would you give a favorite character and why?

The past has absorbed me for a year now, both in my writing and in my reading and so my gift is for characters, real and fictional, who work hard to dig into the past, to report it no matter what the facts present.

I'm thinking of Sarah's Key. No the gift isn't for Sarah, although I imagine Sarah could use this gift. My gift is for Julia if I remember her name correctly, the reporter, storycatcher actually, who peeled away the layers and uncovered Sarah's story.

I give her peace.

What she discovered didn't give her peace. It unsettled her. It changed her life and it changed my life, too. From her I learned that the past has secrets that eat away at the soul of the storycatchers. I learned that some stories are best kept unspoken, close to the heart.

Christmas week and the children were nestled all snug in their desks while visions of vacations danced in their heads. That doesn't quite rhyme, but it does explain the mindset of Pilot Mountain children then. Just like the children of today, they couldn't wait for a few days off, after a school celebration, of course.

They would have decorated the classroom. A father probably stopped by one day in mid December with a tree from the farm. The children were ready and waiting with chains they had fashioned from red construction paper strips, stars they had made from aluminum foil and cardboard, and paper mache ornaments they had slopped and dripped and sculpted with newspaper pieces dipped in a flour and water and glue solution.

They sang Christmas carols. They sang about Santa. They acted out the nativity and blessed was the girl who played Mary. They read from the Bible. The teachers gave them pencils as Christmas presents, if they could afford it. The students gave their teachers small gifts, usually from the Avon lady, if they could afford it. They never exchanged gifts with each other. That thought probably never crossed their minds.

Every year the PTA (Parent Teacher Association) brokered a deal with the local grocer for oranges, apples and candy canes. Walnuts, too. The principal along with the parent volunteers snuck down to the store and picked up the crates, took them to the auditorium, and behind closed doors prepared what for some children would be the only Christmas present they would get beyond the pencil from the teacher. The treat bag.

Then, right before the last bell on the last day before vacation, the children marched to the auditorium to pick up their treasures.

It took the village to raise the child at Christmas.

Gretchen
Posted by Gretchen Griffith at 8:36 AM 2 comments:

Cold. Brrrr. Today we might get up to freezing and I'm talking "the sunny south." Brrrr.

One former second/third grade teacher told me about a cold day at Pilot Mountain Schoolhouse in the 1950's. School had been cancelled for over a week due to snow and ice and this was the first day back. She walked into her classroom early that morning before any children arrived and much to her horror discovered their goldfish bowl had frozen. Solid block of ice frozen. Goldfish suspended in the ice frozen.

Her heart stopped. Forget the fish. All she could think of was the children and the trauma this image would inflict on them. They would arrive any moment. She threw a cloth over the bowl, grabbed it up and rushed to her car. There the frozen fish waited all day, hidden away from view. She didn't bother to thaw it out. No bringing back from the dead experiment here. She threw it away, bowl and all, in her outdoor trash bin at home. The children never asked. They were too excited to tell their snow stories. 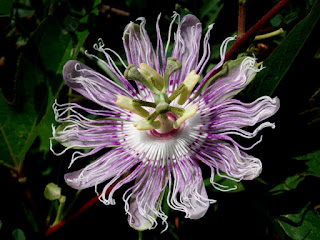 I'd heard that term from several former students, always the girls. The boys played marbles. The girls played Molly-pops. It's the bloom, what a bloom, passion flower beauty bloom, also known as May-pops and apricot vines. The whole school was surrounded by vines and vines of Molly-pops inviting, inticing the girls to "Come, play, dance with me." Can you see a ballerina in the bloom? These girls did. They pinched off the extra legs to form a body, shaped the purple passion into a tutu, and danced with their flower dolls. 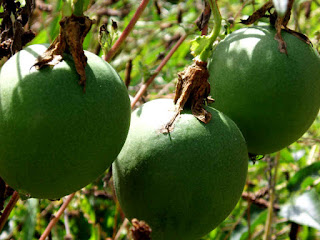 Not so poetic, but still a lot of fun, were the seed pods, egg sized pods, full of air and little dark seeds. Just perfect for stomping. Just perfect for popping. Molly-pops.
Catch of the day,
Gretchen
Posted by Gretchen Griffith at 11:07 AM 4 comments:

Brrrr it's cold outside today. I bundled up, even for the quick dash to the mailbox. Long pants, no question about that.

But for girls at this grammar grade school in the 1950's the cold brought about a different challenge. They had to wear dresses, no arguments, that's just the way things were. To add insult to injury, they didn't just dash from the bus to the school. They had to wait outside in the cold until the bell rang.

If necessity is the mother of invention, then cold is the sister of resourcefulness and resourceful these girls were. They'd wear flannel pajama bottoms under their skirts and push them above their knees during class. They'd wear jeans under their dresses and slip them off when they went inside. The older girls would huddle behind the wellhouse. The younger ones would run and play and sweat and be plenty warm when they finally went inside.

They grew up strong and sturdy and rarely sick.

Email ThisBlogThis!Share to TwitterShare to FacebookShare to Pinterest
Labels: 1950's

Mornings at the School

One not so favorite fact of life for teachers is the meet-them, greet-them, get-them-in-the-school chore known as "bus duty." Rainy days, bring an umbrella. Windy days, bundle tighter. Frigid days, add extra layers. Yet, seven o'clock in the morning when the roosters are still announcing the day, watching those yellow buses pull into the drive brings a certain thrill of anticipation. And when the children, regardless of whose class they are in, give the hugs or the smiles...that's when bus duty turns into a reward.

Teaching in a small school means bus duty comes far too often. Get a week of duty over, and boom, here comes another week the next month.

Mornings at Pilot Mountain Schoolhouse from the students' point of view were pure joy. They hurried off the bus, plopped their books down, and headed to the playground. Even the students who walked to school couldn't wait to get there. They were often at the doors greeting the teachers as they arrived. This was the free play time and they didn't want to miss a moment of it. The teacher chaperoned. That was it. Chaperoned, stood back and watched and rarely interfered. The children organized ball games. They made their own rules for marbles. They took turns at the swings. They settled their disagreements themselves.

The older students welcomed the younger children to their games. They mentored them, taught them the rules and the possibilities. The younger students chose role models, learned how things work. They played hard. They ran and sweated, even on frosty mornings when their breath puffed in little clouds.

When the bell rang, they lined up outside and went to their classes. They were ready to settle. Their minds were awakened by the exercise. Their bodies had worked through the squirmies.

Mornings at Pilot Mountain Schoolhouse. Could it work today?

Gretchen
Posted by Gretchen Griffith at 8:17 AM 2 comments: