Yes, I'm already thinking Christmas, have been for a month now and it has nothing to do with Black Friday or the thrill of buying presents, decorating the tree or baking the goodies. Oh, the drama of it all! But I'm thinking drama in a different sense, a dramatic presentation.

Every year the church I attend holds a Christmas trail at our church park the week after Thanksgiving. (Details here.) By default I have become the director, but that's okay because I am fortunate to have eager volunteers that step up even before I ask. We present the story of Christ's birth using our walking trail as a background, with twelve scenes and numerous actors. Counting them and the workers in the parking lot, the picnic shelter, the bonfire and the hot chocolate tent, we need over fifty people a night just to operate. 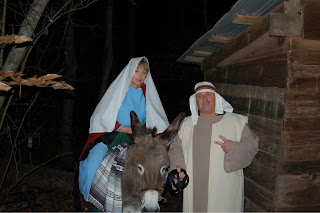 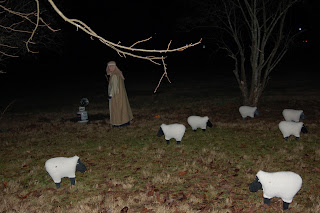 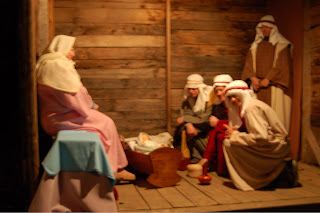 This is entirely outdoors, so the weather is like an additional character. Sometimes on the hill the wind cuts through the thin costumes and freezes even the sturdiest of Roman soldiers. Most often, though, the weather cooperates and walking through the woods under a blanket of clear stars becomes a highlight of the evening. Many visitors say this has become a tradition to start their Christmas off, grounded in the true meaning of the message.

At Pilot Mountain School, before religion was removed from education, the teachers held a yearly Christmas Pageant, complete with the manger scene and adoring shepherds and wise men. I know this because several of the people I interviewed burst out in recitation of their parts as we talked in a once learned, never forgotten sort of way.

I'm sad though, for the schoolchildren of today who won't have innkeeper stories or donkey-gone-wild stories to tell their children and grandchildren. The child actors in our Christmas trail do have stories to tell of roasting hot dogs over the shepherd's fire between groups, of eating the chicken that was cooked over the fire in the traveler's scene, of pretending the shepherd's staff was a machine gun during the scene. Behind the scenes is probably more meaningful to them than performing the same scene a dozen times per night.

We will be ready to welcome visitor on our trail this week, starting tomorrow, skipping to Thursday through Sunday. It's not the same experience as viewing a manger scene on a stage in the school auditorium, believe me. It is the same story, though, told for two thousand years. In the end, that's all that counts.

Gretchen
Posted by Gretchen Griffith at 10:04 AM No comments:

Some days are sacred. They have meaning above and beyond a number on a calendar.  November 11 is one of those days. It seems even more notable this particular year because of the numbers involved.

11-11-11.
At the eleventh hour today I will stop and breathe in the fall air and remember those who have sacrificed their time and energy, and all too often, their lives. I’ve been to the walls of names. I’ve touched the letters and cried about war. 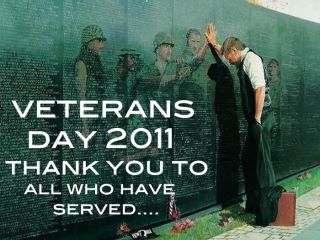 I found this picture posted by a friend on facebook this morning. I traced it back a few levels to

Greg and the Morning Buzz
an early morning radio show in New Hampshire. I don't know who designed it, but it speaks volumes to me in a picture-is-worth-a-thousand-words kind of way, so thank you, unknown artist. And thank you veterans who made it possible for a radio show to be free to broadcast and for me to speak my mind on facebook and twitter.

For several years now I have been involved with AFS, a nonprofit organization that sends students across the globe to live with host families. Peace through cultural exchange is the short version of our mission statement. Here’s the actual:

AFS-USA works toward a more just and peaceful world by providing international and intercultural learning experiences to individuals, families, schools, and communities through a global volunteer partnership.

Each hosted student is assigned a liaison who maintains contact throughout the year. I am liaison for a student from Germany. The American school he attends here also has two other AFS students, one from Japan, one from Italy. The student from Japan is taking US History this semester and was studying for a test this past Tuesday while I met with her host family.
I asked what the test would be on. World War II she answered.

Then she remarked about something I’ve noticed all along: these three exchange students are from the three countries of the axis powers. I am blown away by the irony. Here she was sitting in an American school studying about Japan and Germany and Italy and the war of two generations ago through an American point of view. For these students, American or not, WWII is something for the history book, something they have gone beyond.

There must be a better way than war. We can’t change the past but we can influence the future through the youth of the world so that there won’t be a need for another wall of names. Ever.

Gretchen
Posted by Gretchen Griffith at 9:12 AM 2 comments:

Today my mother would have turned one hundred years old. She was a Pennsylvania coal miner's daughter. That sentence alone tells the story behind her resilience and I really don't need to say more, but I do want to fill in the details.

Her first family chore was to go outside each morning at daybreak to see if the signal flag was flying at the entrance to the mineshaft down the side of the mountain. If it was up, her father could work that day. If it was not, no work, less income and the family went hungry.

She lived through two world wars and the Great Depression between them, Viet Nam with my brother flying helicopter rescue, and nine-eleven and all its horrors on the screen in front of her, knowing too well that one grandson was witnessing it in New York City and one granddaughter was witnessing it in DC, live, up close and personal.

Yet those times of troubles did not define her life. The ordinary, day to day joy of living did. She traveled in a camping caravan in the thirties, gypsy like, open sky sleeping. After that experience of surviving on peanut butter and jelly sandwiches she never ate another one, nor ever, ever prepared one for me. My childhood summers were filled with travel. Often, when she was a bit homesick, she would pile my brother and me into the car and drive (no interstate highways then, I might add) from our new home in North Carolina through the rugged mountains of West Virginia into western Pennslyvania, back to the old homeplace, just for a short visit, just to reconnect to her roots and absorb the strength to face the challenges of living as an alien in a southern culture.

I've felt her influence quite a bit during this Pilot Mountain Schoolhouse project. From her many stories I learned what questions to ask about school life in the 1940's. She was a beginning teacher in a one room school at a crossroads called Eighty-four in Pennsylvania. She wrote about her experiences there in a handwritten, limited edition (two: one for me, one for my brother) memoir. She wrote about carrying the coal inside each morning to heat the school. She wrote about preparing the soup on top of the stove so that the depression era mountain children would have at least one hot meal. She moved next to teach at another one room school in a secluded village called Seldom Seen. When we moved south, she taught second grade at the nearby school, stressing phonics and vowel sounds to children who could not understand her accent.

She never got over the travel bug. She and my dad went to Europe several times and when he died in 1981, she turned next to her grandchildren as travel partners. She promised a trip the summer before each child's twelfth birthday, with one stipulation. The destination had to be a place she had never been. My niece chose Ireland; my nephew, Greece. She took my daughter to Holland to see the spring tulips and my son to Kenya on safari.

She lived to be ninety-two glorious years old. I must say, she did pack a lot into those years! She was a true member of the greatest generation.

But the greatest statement of her life is this. She was loved.

Gretchen
Posted by Gretchen Griffith at 10:01 AM 2 comments: