Being an author has opened my life a wide variety of unanticipated experiences. One was yesterday at Leatherwood, a mountain resort here in western North Carolina. There's just something about being around passionate book lovers, in this case the Diana Gabaldon Outlander series set first in Scotland, and later in North Carolina. Here was my view: 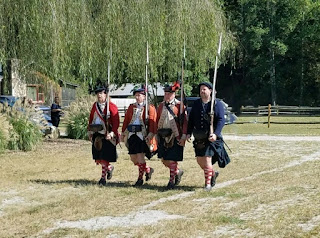 These kilted soldiers were in the process of returning to their encampment. A bagpipe's drone in the background sucked me back in time, much like the main character of these beloved books. 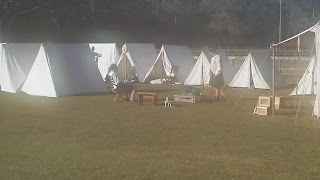 My tent was closer to the simple beauty of the flute. 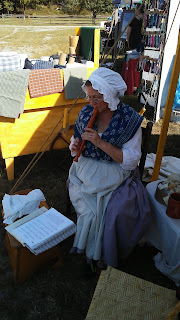 And then later that of the harp. 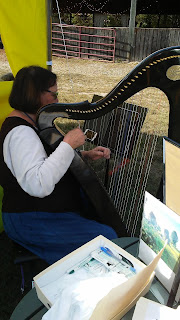 None of my books cross paths with the time travel Scottish Highlander coming to America story of the Outlander series, but I did have books to offer, and these festival attendees were avid readers, after all. To those I met from Florida and Texas and Canada and Scotland (yes there were some who traveled across the Atlantic to this place in time specifically for the Fraser's Ridge Homecoming event), everything about the Appalachians was a draw. Reading for the love of adventure no matter where is the most remarkable phenomena ever!

PS Check out the website for Fraser's Ridge Homecoming. You might have missed it this year, but next year's date has already been announced.

Posted by Gretchen Griffith at 1:45 PM