Doing school visits is a true joy. This past week the joy multiplied when the school visit was at a reconstructed village called Whippoorwill Academy. I was there for Daniel Boone Day and the children were there to learn about living back in his time.

"Would you talk with the children about your books?" the director asked me last month.

Issue. None of my books are the least bit related to any mention of Daniel Boone.

And I did. Full costume and all. Log cabin and all. 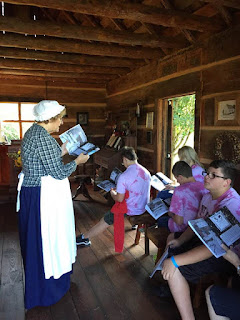 Just how I pulled it off is a story in itself. I'm a former teacher and I knew I could make anything connect to ole' Dan'l Boone if I stretched it.

I just happened to have multiple copies of my Back on Earth book about Apollo Eleven. Before I passed them out to the children we compared Daniel Boone and Neil Armstrong, their character traits. Ding, ding, ding. And it worked! 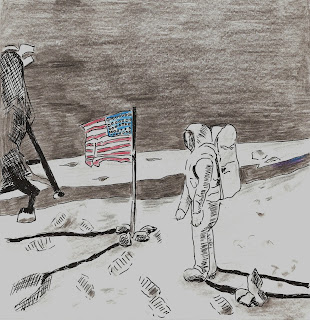 We (mostly they) discussed how the two were similar and how they were different. These men might have made their footprints centuries apart, but they were both from a special breed of men who couldn't keep things as they were.

After one presentation, a parent chaperone came up to me and told he knew the man who opened the hatch when the capsule landed in the ocean, the first to greet the astronauts from their historic voyage. Because of restrictions and legal Naval agreements, this man could only say he was there and could give no details...ever. Would I ever love to sit at his feet and hear the real story! Imagine the courage to be the one who performed that small, but vital task. 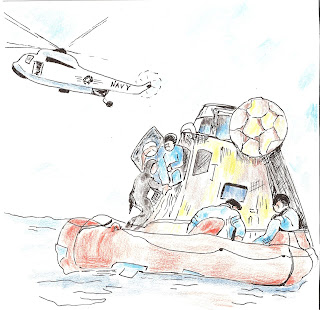 Here's to explorers of the past who made our country what it is today. And to the children I met last week who one day might be the explorers who land on Mars!

Gretchen
Posted by Gretchen Griffith at 9:46 AM