A New Look at Old History

Years ago, YEARS ago in a previous century, I sort of published my first book. I use the qualifier "sort of" because it was published in the business office of Broyhill Industries here in Lenoir, North Carolina and I sort of was the leader of the pack of historians who tackled a tremendous feat. The church I attend was celebrating a bi-centennial and members wanted its history compiled into a book. I jumped at the chance. This was in the pre-computer era, so every drop of research depended on old newspaper articles, church records, and family lore. We (as in several of us) came up with a manuscript that we were satisfied with and typed and published after hours at the work space of a secretary at the Broyhill furniture giant's main office. Each of the twelve of us chose a typewriter, and off we went, typing and printing copies of what we came up with.

Now that new methods of research are available, computer access to archives in other words, we (as in several of us) have come up with a plan. Re-research. Find new information. Redo the book. After an article in last week's local newspaper telling of our plans, the editorial cartoon person gave us a special treat. 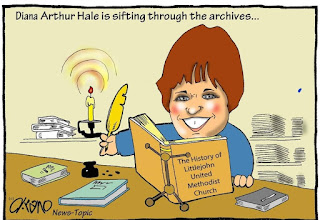 Is that cool or what!

That would be my energizer bunny of a friend, Diana, working her magic to fill in the gaps from the previous book. (And, I must admit, correcting the mistakes we made in our original version.) She's peeling back the layers and finding all sorts of facts that will make the updated book not only more correct, but also rich with details. This history of Littlejohn church is a fascinating read that covers Revolutionary times with overmountain men camping on the church lawn on their way to the Battle of King's Mountain, Yankee invaders riding past on Easter morning while members quickly hide their valuables, including the mules, rebuilding the facility to change from two entry doors (one for women, one for men), and takes the reader up to a fourth century (1700's, 1800's, 1900's and 2000's) with moments of faith in between. What a story it is!