I'm doing a book signing today at an indie bookstore in downtown Lenoir, North Carolina, Tybrisa Books, and to garner a bit of interest, I offered a free copy of my Back on Earth: When Men First Landed on the Moon to the first person who tells me the secret password. When I was selecting the word, I wanted one that meant a lot to me. At first I thought of "one small step," but that seemed too used. Instead I went for "Giant Leap."
The past few weeks have been giant whirlwinds for me, mostly connected to the Apollo Eleven moon landing. A feature article about my book was on the front page...FRONT PAGE!!!...of the Hickory Daily Record. I also made presentations to several groups. Unfortunately I missed the parade and fun and fireworks at the nearby Rhodhiss community where a textile mill produced the material for the flag that is still there on the moon. What a celebration they had! Their one small step of the process was important to the  American people and they earned those bragging rights.

Instead I was celebrating "Apollo at the Ball Park" in Atlanta, Georgia. Interesting thing about that, major league baseball had their own textile connections to Apollo Eleven's success, and they also bragged. I took these pictures at the Atlanta/Washington ball game on July 20, the very day of the anniversary of the moon landing. 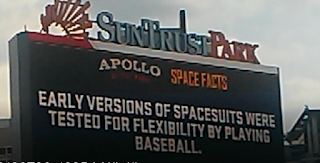 I've been amazed at the contributions I've found of ordinary people fifty some years ago going about their daily work that ended up making history. I've also been amazed at the stories individuals told about where they were at the exact moment Neil Armstrong made his one small step statement. 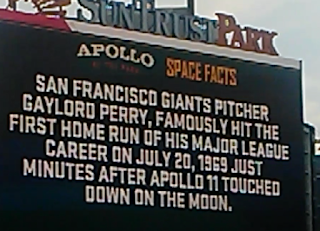 We might not have been doing such giant leaps as a first major league home run, but we did have our own stories that we shared with this new generation. That was the whole purpose behind my writing this book. Have you shared your story? Have you listened to others as they shared their stories?

PS: I've been seeing rustlings about the fiftieth anniversary of Woodstock coming now and people's stories about that. I have none to tell except that I heard about it, but I probably couldn't write a children's picture book about that anyway.
Posted by Gretchen Griffith at 8:12 AM