The countdown is on! This is the week I have anticipated for well over a year, probably even longer since I wrote Back on Earth: When Men First Landed on the Moon five years ago. It's arrived! The fiftieth anniversary of the Apollo Eleven Moon Mission, in case you haven't noticed all the hype floating around the internet.
Maybe I have anticipated this for fifty years, because this book is me, or at least what I remember from this week of July, 1969. It also is partly what other people remembered about their experiences. My artist, Bobbie Gumbert, lined her youngsters up in front of the TV set and watched with them. 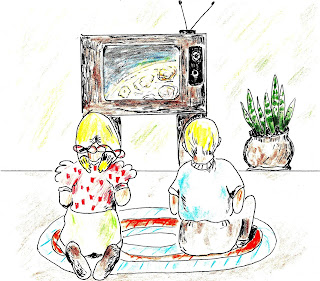 The purpose of my book was to start the conversation between generations about this historical event. My wish is that the children of today realize what a monumental accomplishment going to the moon actually was. As I've watched flashbacks on television and read articles in newspapers and online, I've developed a deeper appreciation. Maybe because I'm older. Maybe because I so passionately want us to return to that moment of unity. Our American pride was at its best as all eyes were looking upward at three men racing away from earth.

Spread the word. Fifty years ago, we accomplished the impossible. If we can do that, we can do anything.