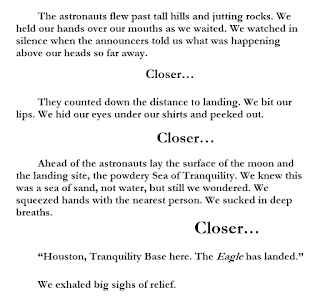 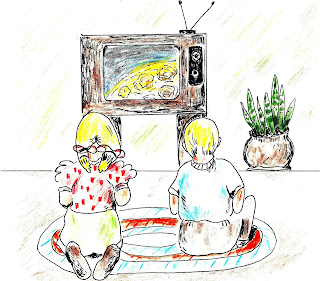 There were many of us who had a personal connection to what was going on thousands of miles above our heads. One was Kristy Dempsey, a fellow children's author from the Carolinas. Along with illustrator Sarah Green, she relates the story of her father's contribution to the Apollo Eleven's success through the South Carolina textile mill that manufactured the space suit the astronauts wore. In her picture book, Papa Put a Man on the Moon, she pays homage to him in a most beautiful way. The artist shows what my artist shows in the picture above, watching the landing together. Kristy goes on to show commentator Walter Cronkite and his "Oh boy, oh boy, oh boy" exclamations. She captures our emotions that day...joy, awe, more than a tinge of fear, and most of all in her book, pride. Pride in what America accomplished. Pride in what her father accomplished. What a wonderful honor to her father and to all those thousands and thousands around the globe that had even a tiny bit part in this.

Gretchen
Posted by Gretchen Griffith at 7:56 AM