Hang Down Your Head, Tom Dooley

Of course I sang the song. I was a child of the sixties. In North Carolina. Enough said.

The Kingston Trio made it famous in the late fifties, but the original folk version twanged its way through the backwoods of the Carolinas long before that. In 1866 Tom Dooley murdered (or did he?) his lover, Laura Foster, who just happened to be the cousin of his former lover, Ann Foster Melton. Whether he did the deed or not has remained one of the greatest deep country debates for a century, worthy of a hit song that has kept the question alive for over a hundred years.

The story garners enough respect to be the focus of The Tom Dooley Festival, a delightful event despite its gruesome backstory. It was held last weekend, as every year, at Whippoorwill Academy and Village, in Ferguson in the foothills of western North Carolina, Tom's stomping grounds. Actors from the summer theatre presented a snippet of the story. I hope Tom's character had a chance to say his proclamation from the gallows: "Gentlemen, do you see this hand? I didn't harm a hair on the girl's head." And then he was hung. And then the legends and whispers and ballads began.

I didn't have a chance to hear it. I was over on author's row, selling my books, two of which by the way, are about characters who in addition to Tom Dooley, can claim the community around Whippoorwill as their stomping grounds. 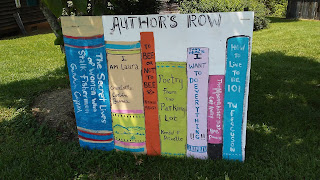 Okay, so I really don't have a book by that title. It's a joke.

Neither does Charlotte Barnes, the author under the tent next to mine, the one in this Author's Row non existent book titles announces "I Am Laura." That's a little closer to facts than my "Secret Lives of Women who Stalk Fishermen," but we had a good laugh.

Charlotte wrote a well researched nonfiction about Tom Dooley, which was her reason for being present at the festival. 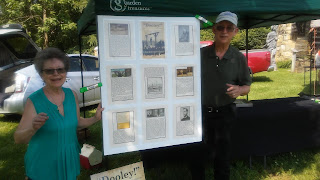 We had a great day, connecting as authors do. I later learned she was one day short of her newest publication, Dooley, a base-on-real-events, Tom Dooley novel told from the perspective of the newspaper reporter who covered the hanging. I can't wait to read it. Her initial shipment arrived at her home the next day, a Sunday delivery, in fact.

Meanwhile I talked with festival goers about my books, not only those two with settings in the Ferguson area. The most fun I had was watching children play with the rockets and parachutes I brought as part of my Back on Earth book, the one about Apollo Eleven. 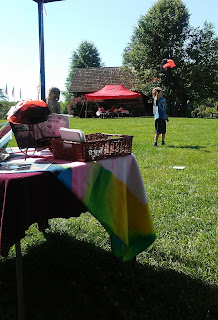 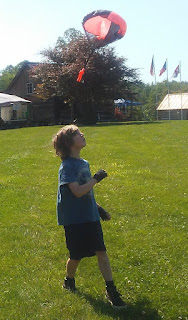 So it didn't fit the theme of the festival with the spinning wheels and blacksmiths and the geneology of Tom Dooley, but we had fun. 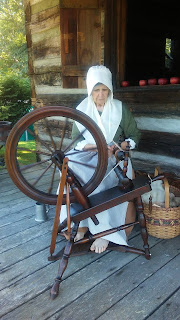 There's nothing quite like spanning the history of western North Carolina civilization from colonial Daniel Boone, through Civil War veteran Tom Dooley to the 1969 Apollo Eleven moon shot. What a day. Nothing to hang down your head about, either.

Gretchen
Posted by Gretchen Griffith at 6:45 AM