Update on my Mother's Cousin

Several of you asked about my mother's ninety-two year old cousin who moved in with us in February. Check out my explanation when I posted about her earlier this spring. She is doing much better, thank you for caring, but the journey wasn't easy nor without bumps in the road. She was one sick lady, but we just didn't realize it. She so wanted to return to her own home, and we tried it. I moved her home March third. She returned here March sixth when she admitted she was too sick to be alone.

In fact, she was sicker the second time around than the day she first arrived in our home after her hospitalization. I felt helpless at times. I'm no nurse, that I must admit. I raised two children and assisted with my ailing in-laws, but I was ill prepared for this bout of stressful health care.

Many people came to my rescue as I came to her rescue. I appreciate the words of advice from friends who had experienced care giving in their own lives. They guided me through my many fears and doubts. They brought much needed home health equipment. I also appreciated the several pharmacists who went the extra mile to find the medications she needed, no easy task for them or me. Her home health nurses? Wonders, to be sure!

My eyes have been opened to the plight of ailing elderly citizens among us, but that is fodder for a future blog post. For now I want to say that we made it through the worst and came out the other side much wiser, much more gentle, and so much closer to each other. At times I felt I had my mother back, she was that similar to her. She endured staying here for a total of seven weeks and was a good sport when things didn't go well. By the end, she was feeling so much better she actually became bored and started mending some of my clothes.

She was also well enough to attend church services, and even went to a dinner theater presentation with my husband and me. That's where this photo was taken. 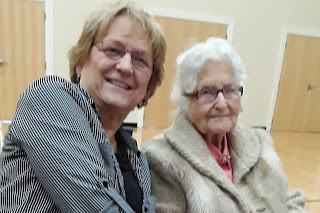 She is a gem. She is a holy woman, never deserting her faith in times of trials, spending hours daily with Jesus in Bible reading and prayer. She read the Sunday School Quarterly lessons I taught each week and discussed them with me. I welcomed her input during the classes, and input she did. She does not hold back when she has a chance to share her faith with others.

I learned so much from her in those seven weeks. Patience. Elder care. I'd say she learned the true meaning of family from my husband and me, a concept she never had the chance to experience in her single adult years. She was taken in as an orphan by my grandmother, went on to the mission field in her early twenties, and became totally independent. Well, let me rephrase that. She was dependent only on God. That I learned.

For now, life is back to normal. I hope she knows she is welcome if the circumstances call for another round of care. After all was said and done, the one single Bible verse I applied these past weeks is found in Philippians 4:13: I can do all things through Christ who strengthens me.

The impossible can sometimes be conquered.

Posted by Gretchen Griffith at 6:30 AM