Fog shrouded the eastern United States on the first day of October in 1944, an evil, threatening fog that caused the downing of eight military flights. In only one of the crashes were there survivors, the one that slammed into a pig farm in western Virginia. While the pigs remained untouched, unscathed and unharmed by an element of chance, all the crew survived by following a command of the captain and bailing out moments earlier. They each had their own story of rescue, of showing up on the porch of isolated mountain farm houses, or of finding each other in the predawn gray surrounding them. These stories were captured in a book by my friend and critique partner, Sandra Warren. On the seventy-fourth October first following the crash (yesterday), there was a celebration of sorts. Read the labels on these water bottles: 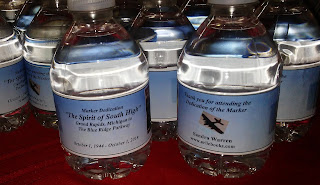 The first half of We Bought a WWII Bomber narrates the story of the bomber before it met its doom in the Blue Ridge Mountains, a unique moment in the history of our country at war and the war effort made on the home front. South High School in Grand Rapids, Michigan raised the money to purchase this B-17.

They had no idea what happened to their bomber until recently when Sandra made the connection between the crash and the bomber. Her interviewing and detecting on both halves of the story collided yesterday at a dedication of a commemorative historical marker on the Blue Ridge Parkway. Former students from the Michigan high school (unfortunately none who helped with raising the funds were able to come) drove to Virginia to shake hands with those who played some part in this remarkable story.

These Virginians told about hearing the crash that morning in 1944, about rushing away from milking the cows to be the first on the scene. Others told about their fathers helping the crew or about their mothers offering a cup of precious rationed coffee to the few who appeared at their doors.

This October 1, 2018 was quite different than seventy-four years ago. The sun shone almost too brightly, making those of us present relieved when a pesky little cloud blotted out the sun and did its best to cool us as we stood just off the Blue Ridge Parkway. The site is not all that far from Mabry Mill that served the community there in Meadows of Dan, Virginia. Supposedly this mill is the most photographed spot on the parkway. I couldn't resist:

In the crowd were park officials and rangers representing the role the federal government will take in maintaining the marker. 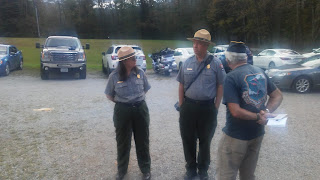 There were also TV crews from Michigan and Virginia. 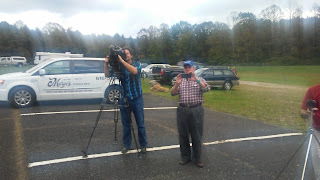 There were blue and red (school colors) beaded necklaces to identify the South High alumni present, and silver ones for those from Virginia.
A reception followed in the Meadows of Dan Community Center. The crowd was so large, the historical society who hosted it ran out of paper plates and I made a quick trip to the village grocery. What a wonderful problem to have!!!

All in all, October first turned out to be a tremendous celebration of the past and what two communities could do when called upon to help the nation during the dark days of war. Markers such as this one will let us never forget the sacrifices made. Thank you to everyone involved!

Gretchen
Posted by Gretchen Griffith at 10:39 AM