Early on we came up with a working title of the biography of Dr. Jane Carswell that we've kept without any variation because it says it all: 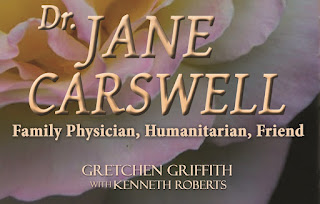 This is a portion of the front cover. I can't wait for you to see the rest of it! That's one of Jane's photographs of her roses in the background, by the way. But what I want you to notice is the subtitle, "Family Physician, Humanitarian, Friend." She was a complicated individual who's life can be narrowed to those three simple words.

When I began structuring the book, I realized I could not do it in chronological order. Things overlapped. Things got muddled in a timeline. A day by day chronicle just wouldn't work for this book, so I did the book in parts, chunks of time that are independent of every other chunk of time.

Part One does follow a linear timeline, sort of, although I freely vacillate from one period of time in her life to another and then back to another. In the end, it  makes sense. For instance I wanted to include photographs of her parents and I put them in chapter two, her growing up chapter. But some of the photographs show her parents in their later years, and I mention them retiring and then list their death dates. But the next chapter picks up when Jane goes away to  Flora Macdonald College when her parents were very much alive and vibrant and getting her ready for college.

But it's in Part Two (Humanitarian) that the timeline loses its mind. It wanders back and forth and up and around. Each chapter starts with when Jane became involved with a particular cause and continues through that narrative, usually to the end of her life. Each following chapter does the same, goes back in time and picks up at the beginning and goes throughout the time she was involved in that project. Some chapters even go back into history and give the backstory of the situation so the reader can understand what Jane was facing.

Talk about a structure nightmare!!

Don't worry! Part Three (Friend) ties it altogether in a grand love story that will give purpose to all the wanderings in the wilderness.