As I was researching the book about Dr. Jane Carswell, I was fortunate enough to have abundant resources available. Her husband, Kenneth Roberts, handed me a two inch thick folder crammed with newspaper clippings about her. Believe me, I read every single one. I spent hours in the archives of several organizations, poring over long forgotten pages in scrapbooks. I used my cell phone camera to photograph articles so I could have them at my disposal during the writing process. Like this one, from the shelter home, chapter eight in the book: 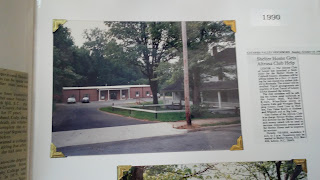 That picture shows the shelter for abused women (that Dr. Carswell was instrumental in creating) before the security fence was installed. The reason for the fence is a compelling story I included in the chapter. I didn't write much about the white house to the right of the shelter. It was used as a halfway house for women who no longer needed the intensive care offered in the shelter, but had no place to live. It gave them a chance to restore their lives before they moved on. That building was cleared away in a controlled burn when a small apartment complex was added on the grounds.

As I read the articles I found so many of Jane's quotes the reporters included in their writing about her that showed her personality or her thinking. I knew I wanted to incorporate them somehow into the book, to make them stand out from the text. I came up with a way. For instance, in the chapter on the shelter home, here's a quote from the Charlotte Observer, December 9, 1984:


"He really hit her hard, right in front of me. But she wouldn't press charges. She said she had to go home and live with him, that she didn't have any place else to go."

The quote is the first thing the reader sees in the chapter, right under the title, and right before the photograph. Here's the picture I selected to start the shelter chapter: 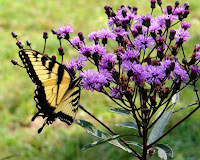 Jane took this photo I have labeled "butterfly on iron weed" for future reference. To me, butterflies represent new life, just as what was offered the women who came through the shelter.

The quote from Jane that I fit into the beginning of another chapter, chapter six, the one about her practice of medicine, sums up her philosophy of how she conducted her medical practice:


"Family medicine keeps one humble. Often you as a physician can do very little to help the patients, but they still give you their trust and share their joys and sorrows with you." from Family Practice Hi-Lights, Medical College of Virginia Student Family Practice Association, Winter, 1984.

I can't wait for you to see the quote at the beginning of chapter fifteen, the chapter I titled "Joy." It is from a poem Jane wrote about her happiness at being married to the love of her life.