This past week we launched my latest book, Dr. Jane Carswell: Family Physician, Humanitarian, Friend and had a wonderful time doing it during a meet, greet and eat social sponsored by the ladies of Fairview Presbyterian Church here in Lenoir. I had fun keeping the cover hidden under a cloth until the big reveal (that met with cheers and applause, by the way). 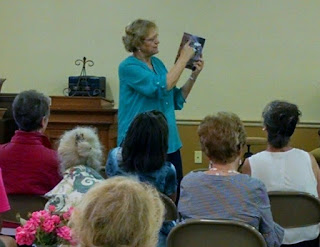 I filled the crowd in on the purpose of the book (to share the life story of a beloved physician) and the format I chose to include quotes and nature photographs at the beginning of each chapter. We talked with people about their memories of Jane and how she impacted the community. Her husband Kenneth also spoke. 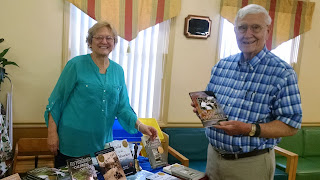 I met several people I had only spoken with on the phone during our interview time. I also met a character from chapter seven, Rufus the puppet. He was the feature of the Happy Hands Puppet Ministry. 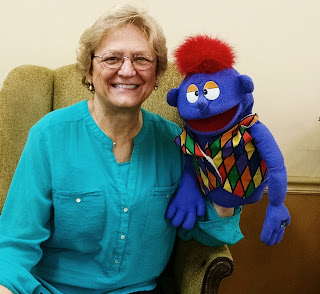 Isn't he a cutie? Dr. Carswell wrote the scripts for the puppet shows and made sure Rufus was the bumbling doofus who was wise beyond what people imagined.

So now the book is out and about and doing its own thing. I'm thrilled, but also a little nervous. Did I do Jane's story justice? Did I offend anyone in the process? Did I correct all the typos? Did I leave anyone out in the acknowledgements? And the list goes on, mostly in the wee hours of the morning.

One thing I do know, this book needed to be written. Her life was too exceptional not be shared and her accomplishments too great not to be spotlighted.

Gretchen
Posted by Gretchen Griffith at 10:23 AM