Before I show you the cover, I want to talk you through the wonderful portrait of Jane that we chose to feature on the front. 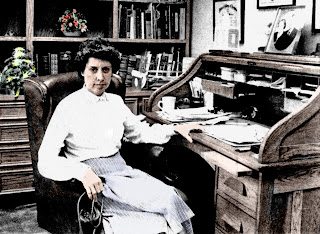 The minute I saw this photograph I fell in love with it. I knew it would make a great cover, I just didn't know how it could be used. Before I turned it over to my book designer, Books That Matter, I needed to get the proper permissions. First I contacted the photographer, Spencer Ainsley, and he so graciously granted his permission. Then I contacted the Lenoir News-Topic, where the photograph appeared in 1984, and they so graciously also granted permission, along with several other photographs I used in the text.

Next I turned to my go-to person, Bill Tate, who restored the ancient, faded, cracked newspaper picture, doctored it up a bit, and colorized it. Isn't it perfect??? There Jane sits, in her office, at the desk that once belonged to her minister father.

Cover designer Kim tried several different approaches that I hemmed and hawed over, and oohed and aahed over. But when she coupled the above portrait with this photograph of a rose that Jane had taken herself, I knew we had struck gold.

Isn't this a beauty of a rose! Merge the two together and TA-DA!!! May I present the cover: 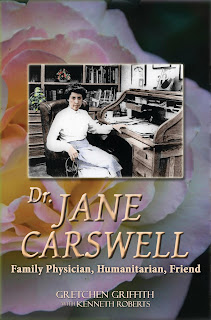 Now available on Amazon and at odds and ends of places here in Lenoir.

Posted by Gretchen Griffith at 7:30 AM