A Week of Celebrations

Yes, that would be my husband, Wesley Van Griffith,
inducted into the Caldwell County Sports Hall of Fame 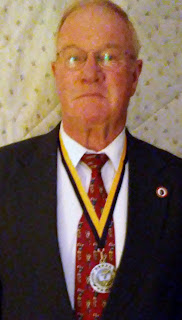 I'm so proud. Excuse me while I digress from my usual blog posts and let the world in on an important part of my life.

His plaque identifies him as an educator, coach and community volunteer. The medal around his neck hangs as a reminder of all those years he spent working out his passion of serving others. If everyone just knew!

Hours of getting to the ballfield early, dragging the infield, mowing the outfield, counseling the players, teaching them not only the rudiments of baseball, but the rights and wrongs of life. There were dark times, but they pale with the many, many joys of being a coach influencing the next generation. In his acceptance speech he mentioned his satisfaction in watching former players step up and take their part in the workings of the world. This induction into the Hall of Fame is a validation of his many years of hard work.

So we celebrated. Both of his brothers and their wives drove to join us at the banquet. Sadly their parents didn't live to see this, but they knew. They were the ones who raised these boys to become men who were servants to others.

Our daughter flew in from her home in Taos, New Mexico. Our son took the afternoon off and brought his family. Our college roommates drove in to surprise us. Numerous friends from our community attended the banquet to show support for my husband. He was humbled. So was I. The next day was Halloween and the grandgirls celebrated being kids. After sitting politely and listening to a couple hours of speeches the evening before, they earned the chance to have their day. 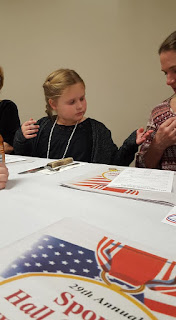 Not only was this the week of the Hall of Fame induction and Halloween, but it was also my birthday, and my son Allen's as well, so the celebrations continued. The only thing I requested for my birthday gift was a Thanksgiving feast, complete with turkey and all the fixin's. This would be the first time this century we celebrated Thanksgiving under the same roof, beyond the "put Jenny in the corner" Skype experience we had done a couple times. Reagan, my younger grand, baked a pound cake...all by herself...her first...the finest pound cake EVER! And did we take a picture???? No!

By the time we took my daughter Jenny back to the airport early Thursday morning, I was worn out from all the happiness. Hall of Fame, Halloween, two birthdays, and Thanksgiving! All in four days! But I wouldn't have changed a thing.