We did it. Sort of. We (about fifty stragglers) had our eclipse moments there in an empty field at our church park. We were prepared. We had the perfect location for a non total event. We had our glasses. We had Moon Pies and Sun Drop and Star Bursts. And we had a telescope. And one pesky cloud. 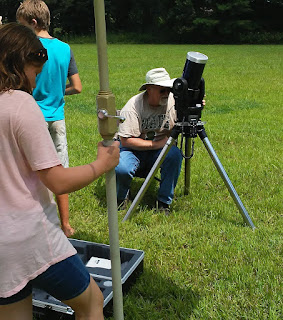 We started peering at the sky  an hour before the peak, using our once in a life-time, never need them again solar glasses, or our improvised shoe box and cereal box viewers that ended up in the trash after the event ended. My attempts at selfies to capture the image of the banana/fingernail moon shape failed. Even those I took directly toward the sun, making a stab out of the blue because I couldn't see through the glasses lens to find where to press on my cell phone, those pictures failed. I'm talking epic Pinterest Fails category failed. My daughter however was more successful: 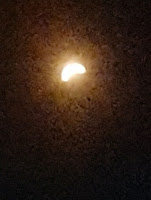 We visited with each other, stood amazed together, pestered the little ones to only glance at the sun, yes, even through the solar glasses. Then the time arrived, and so did one little cloud, perfectly timed to arrive at exactly 2:39 pm. All that waiting and fuss and anticipation and what happened? An errant cloud drifted across our viewing spot, as if in defiance of all our plans. By the time it drifted away, the banana shape faced the opposite direction and we had missed the main event.

But not all was lost. For starters I learned the true power of the sun when 96.7 percent of it is blocked, the remaining three point three percent still delivers sufficient light. I learned that crickets and katydids do react to eclipses and start their nighttime chirping when the sun begins to fade. Most of all I learned about community and corporate fascination with the wonders of the world and sharing the mysteries of the universe with others.

I looked around the crowd, this mix of interested young people who managed to take a break from their routine, joining with grannies like me who were dragging our grands to see the event while their parents were doing the responsible thing and watching on company time from their places of employment. I could have stayed home and watched on the television set. If it were me alone, that would have been my decision.

I wanted my grands to have a memory burned into the recesses of their brains. A good memory of that day in 2017 when we all went out to the park and wandered around the wilderness in dark glasses, carrying shadow boxes in one hand and moon pies in the other.

After all, that's what passing things along to the next generation is all about.

Posted by Gretchen Griffith at 12:40 PM