Now we're talking business, at least the town of Bryson City, North Carolina is talking business. The motels and hotels and inns in a hundred mile radius have been booked for months, and the town is ready. Swain County is rolling out the black and yellow carpet, well, the black and yellow t-shirts to be more exact. They are planning a four day, not-to-miss, long weekend with music and fair and festival and planetarium all rolled into one giant event culminating in the communal watching of the solar eclipse.

There's a museum there in the town that I have somewhat of a connection to, The Fly Fishing Museum of the Southern Appalachians.

I worked with one of the founders of the museum, Alen Baker, to publish his book about the how and the why of the museum. The museum is chocked full of fishing gear and life stories of fly fishermen who used them. Plenty of flies there, too. It would be a great place to stop and browse while the sun gets into position.

As another side excursion option, there's the Great Smoky Mountains Railroad, seats still available according to the website. Leaves from Bryson City. I've been on that railroad, up the Nantahala Gorge, watching the rafters and the tubers floating down the river. So peaceful. So calm. I can't imagine watching an eclipse from the train cars, though. Too much overhead obstruction.

Floating down the river is something else to do while waiting for the sun to hide, rafting the Nantahala to give the train passengers a sight. Or there's the Ocoee River rafting. 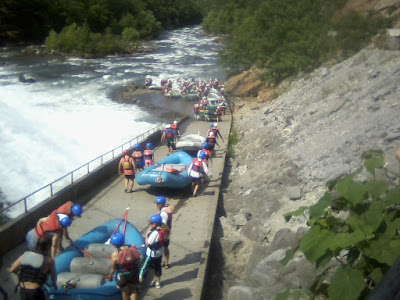 Imagine being on whitewater during a 100% blackout. Not sure about that choice, for me anyway. Make your reservations early, though, if it's not too late already. This picture I took last summer of a raft traffic jam on the Ocoee River on US Highway #64, not all that close to Bryson City, but still in the ding, ding, ding, 100% western North Carolina range.

The Bryson City event is the real deal. Should I attempt it? Or not? It's at least a two and a half hour drive from my home to there, and with lodging filled, it's too late to plan an overnight.

I think I'll keep searching for now, but if you are looking for a true eclipse experience, maybe this is the place for you.