With much pleasure and anticipation, I'm here today to reveal to you the latest book I've helped become a reality. This one I was co-author to Johnny Mack Turner, the same man with whom I wrote Wheels and Moonshine. That book was about his Uncle Claude. This book is about him. Well, him and hundreds of others in our end of the state. 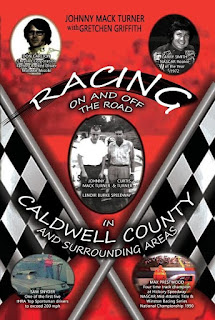 The cover was designed by Books That Matter, and they did an excellent, eye-catching job! The pictures featured on the cover have been toned down a bit in a later revision, but you get the idea. There Johnny is, front and center, with a racer by the name of Curtis Turner. The other four on the front are men from our county who went on to great accomplishments on the track, Don Carlton, Larry Smith, Sam Snyder and Max Prestwood. Same story about the five on the back, all from Caldwell County, Mac Martin, Johnny Price, Dick Greene, Hubert Ennis, and Raymond Wilson.


Note the words in the title, "On and Off the Road." They are important to the story because much of the early racing here in our county was on-the-road street racing, back-country road racing to be more exact. Johnny is a master story teller with plenty of action in his past to build a book around. Here's the introduction from the book's Amazon page:

From its shady beginnings in the moonshine industry to the shiny glimmer under track lights, motor racing has been an unavoidable element of reality for several generations in Caldwell County, North Carolina. Local lore is overflowing with the adventures of racing both on the road and off, where if a person wasn’t involved in racing, then his neighbor was. He might have been the one spending hours in the garage perfecting his car for the next trophy chase, or he might have been the one who heard the deep rumble of the engines in the distance and hurried to the roadside to watch two drivers prove their worth. This passion to control the power of the engine unfolds in a most remarkable story captured by Johnny Mack Turner with the help of Gretchen Griffith. He opens his scrapbook to the world, revealing a personal account of motor racing in western North Carolina. From his roots in the history of the region through tales of on and off road drag races, circle tracks and motocross events, Johnny gives the reader a glimpse into a vibrant culture seldom revealed.

Special thanks to Bill Tate who restored several of the original pictures. The differences are striking.
The book is chocked full of photographs from Johnny's personal collection and from many others throughout the area who shared with us. It is also filled with life stories of the men from Caldwell County who answered the roar of the engines in their own unique ways.

Posted by Gretchen Griffith at 6:26 AM