It's All Over Over Here

I write memoirs for other people. That sentence breaks down one aspect of my writing into the basic pitch, Preserving Local Stories.
On the other hand, probably the other side of my brain, I write children's books. The two overlap on occasion, but usually I compartmentalize them during my working habits. Survival technique, I suppose. For now, I'm doing what I love most, meeting new people and listening to their stories...catching them so to speak.

Yesterday was one of the doozies. What fun I had. Two gentlemen, brothers, one a hundred and three years old, one ninety-eight. When I walked into the house of the ninety-eight year old, my eyes were drawn immediately to a portrait hanging on the wall. As I interviewed him, I couldn't keep my eyes off it, off its meaning and its simple joy. I contained myself as long as I possibly could and after a few growing up stories, I popped the question: Is that you?

He smiled as if he couldn't contain himself either. "Yes," he answered. "Want to hear the story?"

This is what storycatchers dream of. Could I take a picture of your picture? "Yes, It'd be an honor." 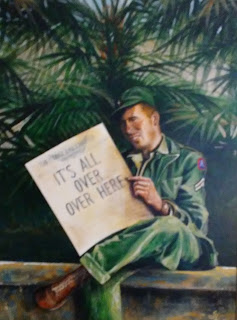 He scrounged around, not an easy thing for him to do considering his yards and yards of oxygen hose dragging behind him, until he found the correct picture album, the World War II album. He opened it to a well-worn page. He's done this before, I could tell.

"Florence, Italy. I was tired. I sat on a wall to read the Stars and Stripes newspaper, the one that told us the war on the Italian front was over. All I could think about was going home, because the war is over. A man came up, took my picture, sent me a copy."

He showed the photograph over and over and over until his son painted it and gifted it to him one year. Norman Rockwell himself couldn't have done a more poignant job.

Sometimes a storycatcher is fortunate enough to find a gem worth blogging about. This is one of those times. I need say nothing more. The picture says it all.

Posted by Gretchen Griffith at 6:47 AM