Preparing for a Long Cold Winter

I'm sitting here in the warmth of electric heating, not worried at all that I need to fetch wood for the fireplace. Although there's a good five inches of fresh fallen snow outside, it's downright toasty in here. We do have a back-up heat plan in case of emergency, an old Franklin stove in the basement (thank you, Ben) and plenty of firewood my husband chopped last fall (thank you, Van).

As I'm working on memoirs for other people, they often talk about the "good old days." I've come to the conclusion that parts of the olden times were not all that good. Take wood chopping. Please (thank you, Rodney). 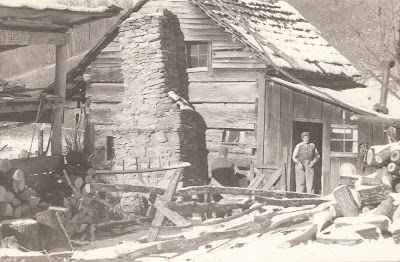 Times were simpler when struggling to survive was the major day-to-day activity. The housewife in the mountains wouldn't have had time to stress about facebook posts or twitter accounts. The latest styles from the runway in Paris meant nothing to her. A new scent sprayed on her as she walked near the perfume counter in the department store? Wouldn't have happened. Ten minute supper preparation from freezer to microwave to table couldn't have even been dreamed of it.

Face it, folks, the good old days didn't pass out any favors to the women who worked the earth. They had it hard. True, they were a sturdy breed because they had to be, in a do it or die sense. Most did it. Some died young from the labor intensive household, or the labor of having a baby a year.

I recently read Asylum on the Hill, a nonfiction about the Athens, Ohio Lunatic Asylum by Katherine Ziff. This book traces one institution from its beginning days just after the Civil War to its closing in 1993. I was surprised to read case studies about men who suffered PTSD (with a different name) from serving in the Civil War, thinking post traumatic stress came about only recently. And the mothers and fathers who lost sons during that horrid war between the states, their ranks filled the asylum as well.

Saddest of all, I read of wives who could not cope. Look at the picture of this housewife in the mountains with traces of snow on the frozen woodpile and imagine what a harsh and lonely life she might have led.

The human spirit doesn't usually quit when the going gets hard. Not usually. Not when there is support from family. Not when children or caring neighbors come along and help with the chores. Not when faith in a higher power restores faith in getting through the day.

I wish I could tell that woman in the picture that it gets better, but I'd bet she'd say back to me, "I'm doing right well, thank you very much."

That spirit is what gets us all through a long, cold winter.