I was at a meeting a few weeks ago and a man approached me. Last spring he had purchased a copy of my Lessons Learned book. 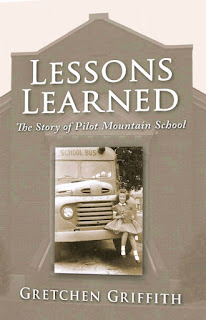 He wanted to share a story with me. Although he was originally from the community where the book (nonfiction, by the way) takes place, his family had moved away before he was old enough to attend the school. But his sister was, and there-in lies the story.

This sister is now living in a constant care home, suffering from Alzheimer's. She barely recognizes her family, isn't aware of the world, and rarely reacts.

He brought the book to her room on a visit one day. He had read it, finished it within days of first purchasing it, and he found his sister in it in a group photograph. He wanted to show her, hoping for at least one more connection, anything. He would take anything.

He read the pages around the picture to her. Then he showed her that picture. She found herself. She pointed to others in the pictures and spoke their names, every one, even the teacher.

With tears brimming his eyes, this man said to me, "I want to thank you. For five minutes, your book gave me my sister back."

This is why I write.