I was at Lake Lure, North Carolina this past week, enjoying a day out with a friend, looking for the stair steps from the film site location of Dirty Dancing, when I ran across this majestic mimosa tree. 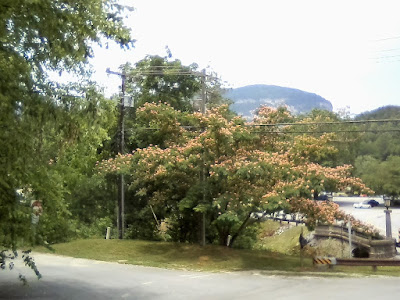 I don't know if this season is any different from others, but for some reason I've noticed more of the pink blossomed trees than ever before. Maybe I've just never paid attention. Maybe they are making a comeback here in western North Carolina.

I call it a comeback because sixty some years ago, these trees almost became eradicated in our area. The old folks say it was "the blight." In order to keep the disease from spreading, infected trees were first chopped down and then chopped up...into oblivion, destroyed. Yet that's not the full story. The old folks had more to add, and from what I've read in my research, I did find an underlying desperation that accompanied this act.

Because at the same time, sixty some years ago, the polio epidemic was rampant here in western North Carolina, and parents were looking in desperation for any and every possibility of blame. These trees, with a blight infection creeping up their trunks, became a logical place to point. Local panic ensued. Parents looked above them in the canopy and saw the spread of death instead of the delight of beauty. A determined parent watching the evil of polio creep through the neighborhood would eliminate any threat to the family, real or imagined. This was available. This was tangible. This had to go.

Mimosa trees became the scapegoat for a much bigger problem. Maybe the blight would have killed off the trees anyway. Maybe not. But now, after all these years, the mimosas are back, in full bloom and regally adorning our landscapes. I look at the blossoms and see innocent beauty, with not a hint of peril.

Gretchen
Posted by Gretchen Griffith at 10:56 AM