My husband and I spent a delightful four days last weekend at a blue grass festival here in western North Carolina. Merlefest. Named in memory of Doc Watson's son Merle who was killed in a tractor accident not all that far from where I live, the festival has grown by the thousands each year. My favorite venue of the twelve is the traditional tent where the poets of the Appalachian sing old ballads and tell old stories. 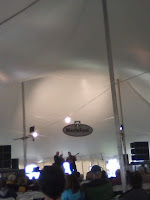 I snapped this photograph during the tribute session on Doc's favorite songs. He died two years ago, but I was fortunate to have attended his last public appearance, singing gospel on the creekbank a mere two weeks before his death. I sang along, as did the rest of us thousands sitting in the audience, just like this year under the massive tent.

The Wilkes Community College campus where Merlefest is held each year was at its finest. The grass was green, not blue at all. Blue Grass is music. Green grass is nature's carpet where the tens of thousands (plus me and mine) set lawn chairs and picnic baskets. The elegant gardens bloomed in nature's time that this year coincided with Merlefest time. Star of the garden, the rhododendrons. 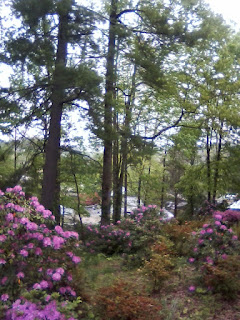 Rhododendron. What a word to spell check! An answer on the television game show Jeopardy a couple weeks ago was "the Greek translation for Rose Tree." The question the contestant had to come up with, "What is Rhododendron?" Look at the picture. Do you see a rose tree or two? Okay, so more like a bush, but here in the southern Appalachians, we revere it equally with the rose. 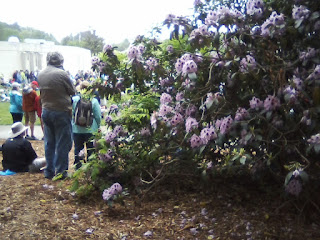 The blooms endured extra hot sunshine on Thursday and Friday, overcast skies on Saturday, and torrential downpours on Sunday. So did we. But like the flowers, we endured. We smiled at the familiar songs and cheered at the new styles of music creeping into Blue Grass. We will return next year and so will the blooms, because the cycle of life and music surely continues.

Gretchen
Posted by Gretchen Griffith at 6:56 AM