Not that I ever attended a Super Bowl or anything, but if I ever had any desire to do that, it would be this year.

I've been to only a few professional football games. Cleveland. Denver. Carolinas. Each was entertaining, but I can't even remember who played beyond the home team, or if that home team won. I was more the marching band football supporter growing up. What happened off the field was entertainment enough for me.

For a word oriented person like me, I've had fun watching how people use words and images to show support. Like dab, and thank you to the several people who posted these pictures on facebook:


And a play on words for those of us who remember Little Debbie:

My favorite is the road sign driving north from Charlotte where there's a small town named Denver and another named Newton...Cam Newton...Quarterback for the Panthers... 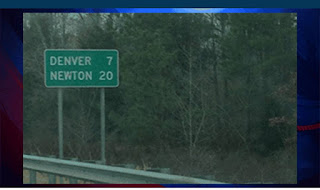 Of course a driver on the north side of those cities would see completely different road sign, but no one has dared to post a photograph of that. I'll follow up this post next Monday when we see if the sign was an omen. Or not.

Yes, it's been fun watching from the sidelines. I can't seem to shake that marching-band-member-turned-author syndrome.

Posted by Gretchen Griffith at 10:59 AM