There's something about a new year that brings hope. Today we have three hundred and sixty-six days of a blank slate ahead in 2016. I wonder what is in store.

When this penny postcard was sent in 1910 what was the sender thinking? Did he know what was coming for him in 1910? 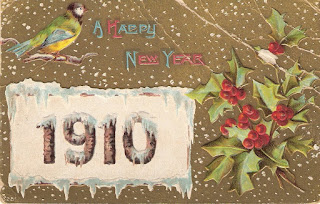 How different was the world the day my husband's great, great grandfather stuck a penny stamp in the corner of the back of this card and walked to the post office on December 27 where it was stamped 11:20am. So much as happened since that day, the good, the bad, the common, the extraordinary.

Did Agnes have any idea they would be married before the year was out? Would they have ever imagined they would have dozens and dozens and dozens of descendants living throughout the United States? Did they imagine a world war that sadly wouldn't be the war to end all wars or a second world war that once again did not end wars? Did they foresee the flu epidemic that came a few years after this Happy New Year wish, or the polio epidemic that killed and maimed the children?

I doubt it. Because on January First of every year, even 2016, hearts become hopeful. Fears take a back seat for just that one day. The human spirit triumphs.

Posted by Gretchen Griffith at 12:00 AM