What a week this has been! Because...Ta-Da! I have a new book to tell you about, my brand new, just on the market ebook. So it doesn't fit my blog's subtitle, The storycatcher looks at life in rural North Carolina in the 1940's, 1950's and 1960's. Not at all. But that's okay. I write what I enjoy writing.

This, my newest book, is a short little ditty with a contemporary setting, three children going on a hike - in the present tense of 2015, no historical nonfiction here. Not only that, my plan is to have it in ebook format only, not even publishing into print, a concept totally alien to the people of the years I usually post about.

Repeat: Ta - Da! Now presenting, my newly released kindlekid book, Hoop Hike. And, shhh! Don't tell my granddaughter, Reagan. I wrote this book for her next birthday, so it's a surprise. 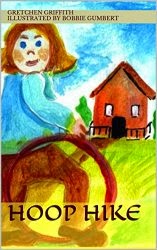 I wrote the manuscript last summer, although it had been rolling around my mind long before I ever opened a fresh page on the computer...long before. Back when I was teaching fourth grade, (in another century) I always took my students on a field trip to Tuttle Educational State Forest. One of the learning activities was to walk on the "talking tree" trail with hoops. The children threw their hoops into the woods and then listed (and charted or graphed) whatever they found inside their hoops. Answers often ranged all the way from worms and acorns to litter and rotten apple cores.

So I imagined three children doing a similar hoop hike, but without the graphing requirements relating to school activities. Just for fun. I added my creative granddaughter, Reagan, using her imagination and finding what only she could see...well, when you read the book, you'll get the idea.

During a visit with my cousin, Gerald Gumbert, and his artistic wife, Roberta, aka, Bobbie, I happened to mention, as part of the conversation, that I had this manuscript but no illustrations. It was a peanut butter/jelly kind of moment, a melding of like minds, that moment when life hands you a special treat. We talked. We meshed. We developed a plan.

She came up with the characters and started the illustrations. Thank you Bobbie for your hard work!

Meanwhile I took a class on how to publish on kindlekids called Kindle Kids Mastery Course. Best money I've spent in a long time! I referred to it over and over as I practiced uploading the delightful pictures Bobbie sent me, and practiced again in formatting the text. This past Monday, when I settled in front of my techie cousin's computer with him at my side, I was ready. Well, sort of. It was a learning experience, to say the least, a seven hour learning experience which would have been made easier had I formatted the pictures correctly instead of waiting until I was ready to insert them. I spent most of the time cropping, checking on how it looked, cropping again, and replacing. We did it, and thank you, Gerald, for your much needed expertise.

I decided to select from the kindlekid cover templates using a cropped corner taken from one of the pictures Bobbie had sent me. Easier said than done, because I had to work around the background picture to insert the wording. I wanted to use a pinkish color on the cover, Reagan's favorite, but again, working around the background colors, that was a no and I went with the more neutral shades.
I've inserted another picture here to tease you. That's Lou, finding crayfish in his hoop. And yes, I used the word crayfish, not crawfish or crawdad. Growing up with a creek in my backyard, I heard the "crayfish" word, most often used by my mother screaming when I appeared at the backdoor with one pinched between my fingers.

I'm a little sad whenever I finish a project. I spend a lot of time with the characters, this time with Sue and Lou and Reagan Roo. They have become my friends and I will miss them, but now they are yours. In the end, that's what publishing a book is all about, creating and sharing.