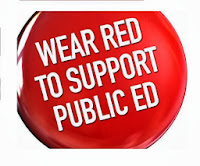 Today the teachers in North Carolina have drawn a line, a "stop the madness" line.

Today many teachers performed an act that I am supporting by wearing red, because, after all, retirement doesn't break bonds with fellow educators. Today, November 4, they performed a "Walk-in." Akin to the powerful, often used (but not in North Carolina)"walk-out," today's announced through social media walk-in will have the teachers there, on the job, doing what they love...teaching. They aren't deserting their charges. They aren't leaving their posts, nor walking away.
﻿
﻿ ﻿ ﻿ Instead, they are coming to work as they do every other day prepared with lessons designed to fit the core curriculum of their particular field. They are wearing red, announcing to the world they want their grievances to be heard. They are
inviting the world to listen to their pleas for fairness and equity.

My commentary here, after all, it's my blog: The teachers at Pilot Mountain School came to work every day ready to do their jobs, anticipating that their students would learn. Forty years after its closing, that hasn't changed. Neither has the determination to do the best for every child.

What has changed is perception. The state of North Carolina traditionally looked upon its employees as "civil servants" who gave willingly and sacrificially to the greater cause, for little compensation, a pittance in reality. Through the years, after much hard work to change that perception, teachers had been elevated to the professional career status. They still serve, but servants, they no longer are. Unless...

...unless the General Assembly in Raleigh carries through with current legislation. Loss of tenure. No pay increase again, fifth year in a row. Advanced degrees that mean nothing. Jobs lost over classroom test results. Required teaching methods. Wait. What am I saying? Even in the 1950's, an advanced degree meant something and test results were used to point out weaknesses in the student, not the teacher. There was no tenure, true, and teachers could be fired at the whim of an enraged school committee member. But are we going forward into a new century or backward to an earlier century?

Gretchen
Posted by Gretchen Griffith at 11:50 AM