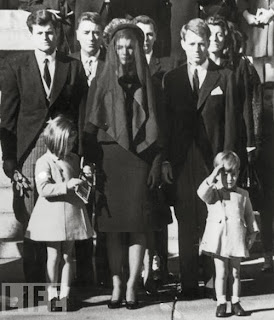 Fifty years. Has it really been that long since I was sitting on the couch, in tears, watching John John salute his father's funeral procession? Fifty years seem like yesterday, it's that imprinted into my memory.

One thing I've noticed the last few days, it's been imprinted into virtually everyone's memory as well, those masses of us who sat huddled in silence beside a television, shocked into an unexpected grief. But I already knew that from doing this Pilot Mountain project. It was a defining moment for this little school, for the nation, the world. All the conspiracy theories that have cropped up since then have not distracted me from what I felt.

Only later did I realize this picture above of Jackie, her children, the Kennedy brothers, the picture of sadness in their faces, this one family portrait represents the moment we as a nation lost our innocence. Nothing was ever the same.

Fifty years, and we are still recovering.

Gretchen
Posted by Gretchen Griffith at 8:40 AM