This past weekend the North Carolina Society of Historians held its annual awards banquet to honor books published the past year. My book, Lessons Learned: The Story of Pilot Mountain School, was presented the Willie Parker Peace award.


﻿ ﻿
Named to honor the memory of an historian in Henderson, North Carolina, this year's prize was awarded to several historical books. I feel honored and humbled that mine was included with them. I've read a few of the others and they are indeed remarkable. 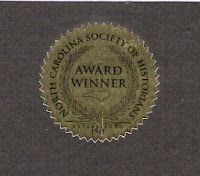 To me as an author, this award is a seal of approval. Someone out there, someone with no connection to me, thought enough of this book to validate my hard work, to say it was worthy of another reader picking it up and spending time with it. I've said many times, this book wrote itself. The people I interviewed were the true authors. I just collected and arranged, although I do admit there was a lot more to the process than that.

Inside my award folder was a page containing the judges’ collective comments. I want to share a few:

“We thought we knew where this author was going before we even opened the book…Pilot Mountain, but were we in for a surprise and a rude awakening. We only had to read to page FOUR to gain our education, as we were informed that there were EIGHT (8)…YES, EIGHT…landmarks in NC named Pilot Mountain. One judge sarcastically remarked, 'What, they couldn’t come up with other names…they had to name eight landmarks the same thing? No wonder I get lost all the time!' Thank goodness Ms. Griffith cleared it up for us with regard to the Pilot Mountain School of which she writes.

Interviews with past students of the facility tug at the heartstrings. They absolutely loved their school and this feeling is felt through their words. These feelings, all these facts about the school, would be forgotten if not for the exhaustive work, careful research, wonderful production, of this book. Griffith has brought new life to this little Pilot Mountain School on paper. The old schoolhouse, once a beloved community hub, was revived to become alive again and frequented by the locals who had once had to sit quietly at their desks to…learn! Superb job from cover to cover.”

Thank you to the Society for recognizing Lessons Learned in this way. Thank you to the community for sharing their lives with the world through this memoir and to Tom and Judy Brittain for selecting me to be the collector of these precious stories. And finally thank you to my publisher, Cynthia Bright, and my editor, Carol Bruckner. We did good!

Gretchen
Posted by Gretchen Griffith at 8:11 AM