The state of education in North Carolina public schools has been the topic of conversation (and demonstrations and marches) this past summer. It's also been the topic of several blogs of mine. Hang in there because here's another. One of the eye-opening experiences of writing Lessons Learned: The Story of Pilot Mountain School has been seeing education through the eyes of those who went before me, seeing how schools operated, comparing then to now.

Another has been the reality of lessons learned by reading history, or more bluntly, lessons not learned. I've always been hooked on history, been of the belief that we are better for studying it. At least that's what my teachers drummed into my head.

"Those who cannot learn from history are doomed to repeat it." George Santayana 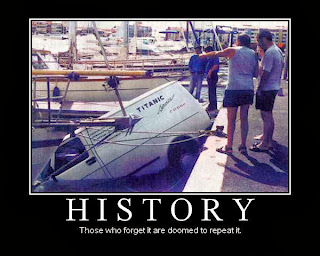 Okay, so this picture is more a lesson in irony than history, but it was too good to pass up. Like these men, I have seen first hand this reality about lessons learned.

Here's a lesson for today's North Carolina leaders from an editorial in the Raleigh News and Observer dated February 20, 1957:

Over fifty years ago this was the argument. It could have been yesterday.