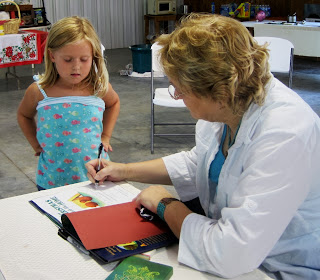 This past Monday I launched my When Christmas Feels Like Home off to make its way in the world. I did my part in getting it ready for that moment and I'm not just talking about the launch party. I'm talking work, work, work and plenty of team effort. My critique group, brutal though they be, believed in this simple story about a boy, Eduardo, moving to a new life. They were with me for those first versions years ago, as were several online "beta" readers.

Now it's out of our hands and into the hands of the children. That was my goal through all the submissions and revisions and rewrites...get it to the readers. I've met with the reality that first it will go through the gatekeepers, the parents and media specialists who are the first line of defense. I appreciate their very serious task, applaud them, and encourage them to give Eduardo's story a reading.

And then I celebrated. Unairconditioned, park picnic shelter, water bottles instead of champagne. But I partied.

The guests participated in centers filled with activities related to the story. They played futbol and they played football. They wrote words floating on puffy clouds to inspire me. They created bony fingered tree skeletons and pumpkins that smile. They colored the Christmas page, the climax where Eduardo finally gets to open the Christmas box with the Nativity. They sat in chairs and read the book and rubbed their hands over the pictures, gently, softly, with reverence, tracing the outline of the characters' faces.

We ate food that I matched to the story. My antique toy car carried Moravian cookies shaped like Christmas trees so that for this day, trees rode on cars. The children sampled the candy pumpkins. I don't think too many of them attempted the pumpkin dip for the "Eduardo ate Thanksgiving turkey with his friends" page, but the adults raved about the flavor...and the book.

I came home worn out, drained emotionally and physically, but oh, so satisfied. No doubts now.

This book will soar!

Posted by Gretchen Griffith at 8:08 AM