My younger granddaughter is off and running (literally) to a new part of her life, kindergarten. She's happy and I'm happy for her. When my daughter-in-law gets over the meloncholy of her baby going to school, she'll be happy, too. That might take five minutes because she has plans to meet other mommies at Starbucks!


There was no kindergarten at Pilot Mountain School during most of its existence, or even for the most part in the whole state of public education in North Carolina. Local units, especially city systems, funded kindergarten starting in the late fifties, but the state didn't catch on to the value of early childhood education until the seventies, 1972 in Burke County.


Beginning in 1969 there was a federally funded kindergarten there on the campus. It began the last year the school served first through eighth grades. It continued for two years after that when the school system realigned and it became a junior high with seventh and eighth grades only. Imagine being in a kindergarten class on the first day of school, walking in the halls with wanna-be teenagers and nothing between.

But it worked. The principal made sure it did. The teachers made sure it did. And the older students became mentors, dropping by the room to sit and read with the younger children, to buddy with them, all before the technique became a "modern" concept.

These children in 1971 didn't know how the world would change by the first day of kindergarten for their own future children. All they cared about was love. Security. Feeling wanted and needed. And getting home.

Maybe kindergarten hasn't changed all that much after all.

Reagan Griffith, have a wonderful first day of school! 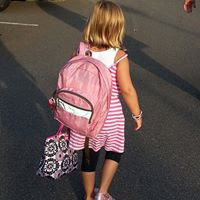 Gretchen
Posted by Gretchen Griffith at 9:07 AM