This past weekend I was the guest speaker at the fall meeting of the Alpha Nu chapter of Delta Kappa Gamma. The members are current or retired educators, so I felt a kinship to them with my teaching background. More than that, I know one of their former members, Edith Satterwhite, teacher and principal at Pilot Mountain School.

"Know" perhaps is not the word I should use in this context. I was never fortunate enough to meet her since she died in 1999, long before I began this project. Yet I know her well. I know her through her former students who looked to her for guidance, through her co-workers who remember her as hard working, through her family who praises her for being their rock, and most of all, through her writings.

In a written version of a speech she presented at her church, she showed her personality. "A little more than fifty years ago I came to this community shortly after Pearl Harbor in 1941. I was twenty-nine and a half years old. My hair had already turned grey...that's one reason for my being called Old Mrs. Sattershite for the last fifty years. You know the other reasons..." 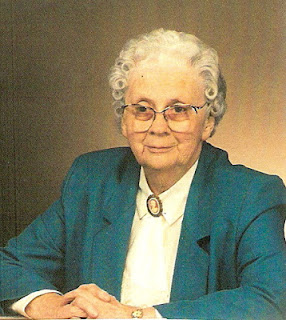 She dropped out of high school in order to care for younger children in her family when her mother became too ill. She returned the following year and graduated top of her class.

To raise money for tuition at Appalachian Teacher's College, she worked as a nurse at the nearby mental hospital. She appeared before the North Carolina state legislature to open their eyes to the horrific conditions she witnessed there.

As a beginner teacher she lived away from home, only returning during the fall break when her school closed for the fall harvest season. She eventually married and found a position as teacher and principal at Pilot Mountain School the year it opened. Not only did she teach the ABC's, she participated in the home front war effort. She weighed scrap metal the children brought to school and awarded prizes for those who earned them. She collected nickels from students buying war stamps and converted their filled booklets to war bonds. She stayed late and came on Saturdays to register families for their ration booklets.

She always taught a combination class at the school, two grades together with two sets of lessons going on at the same time. She was music teacher, physical education teacher, art teacher, librarian and nurse.

More than that, she inspired children. She encouraged them to always reach higher goals. Many former students of hers became teachers because of her influence. Her legacy lives on in the students they in turn taught in their classrooms.

Yes, just like me, many in the county "know" Edith Satterwhite through the actions and words of the children who once sat in her classroom.

What better way to live on than through an unbroken chain of teachers.

Gretchen
Posted by Gretchen Griffith at 9:09 AM