Announcing to the world!!!


Two weeks from today at ten o'clock in the morning, yes, a Tuesday morning while the world is busy going about its normal business, there will be an unveiling, a reveal and a spectacular launch (no fireworks necessary) happening at the Pilot Mountain School auditorium.

Because that's when I will stand on the stage and present to the community the book I've worked on with them for the past three years. Isn't it a beauty?? 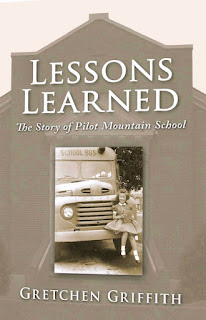 Okay, so I've revealed the cover before, but what's inside is the true reason for the launch.

There won't be clowns (not officially, at least) or balloons. Glitter and glitz just doesn't seem appropriate for a book designed in black and white tones inside and out. In my head, however, the colors will be vivid, Fourth of July starburst vivid.

The ceremony will be short. And sweet. A prayer, a word of welcome, a dedication and many expressions of gratitude from me. And then...

And then I'll hold my breath as my book goes into the hands of those around me and it will be no longer mine.

Hope to see you then.

﻿
Posted by Gretchen Griffith at 9:45 AM