I've mentioned before that there are eight landmarks in North Carolina named Pilot Mountain.

I assume way back when the various explorers and pioneers and soldiers were blazing trails through the wilderness, they didn't bother to consult each other as to what names to give landmarks in case one was already taken. They just anointed them with the most convenient, most descriptive name to make directions clear. When a general wanted his men to meet at a particular spot, he'd use a pilot to guide them in a "turn left at the pilot mountain" kind of way. He needed something that stood out, apart, recognizable so that, with no room for errors in judgment, no one would second guess. A pilot. Pilot Mountain. 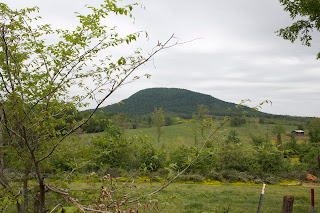 Because it stands apart from the South Mountains to its east, this mountain has been
often used as a landmark for travelers. Col. Patrick Ferguson’s 1780 chart of the region
labels it “The Pilot Mountain.”


﻿That's the caption that I wrote to go with the picture of the mountain in the book. What the reader can't see is the chain of mountains to the east, all lined up in a row, like good little children in a class on the way to lunch. All except for this one, this little stubborn mountain that stands alone. It is covered with trees that hide the gashes and gullies carved by gold miners generations ago. Perhaps deep in its bowels lie riches beyond imagining. Gold. Or perhaps, those men of long ago, the ones that moved on to the California Gold Rush, extracted it all, bled the mountain dry before they left.

What a perfect name for a school. Pilot Mountain. They both stand alone, this school, this mountain. They have stories, some told in my book, some hidden in memories too private to share. But some stories, when the moment is right, are there waiting for a storycatcher to find them, pass them along.

That's what this project has been about.

Posted by Gretchen Griffith at 8:30 AM