So, it's been a while since I've blogged, I just didn't realize how long. But I have been busy doing what writers do, writing, just not here.

My writing this summer consisted more of composing short bits, two to three sentence captions to fit the pictures. The process is not as easy as it sounds.

For example, this photograph was given to the project by Floyd Thomas, the son-in-law of Frank Baker, the man in the picture who donated the land to the county. 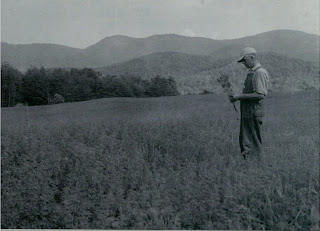 By all accounts, he is standing in the exact spot where the school was built in 1942, based on the mountains in the background and based on the opinions of the many advisors I had looking over my shoulder, discussing it among themselves. (That was a fun day.)

I flirted with several captions, trying them out, seeing what fit best. When the picture location in the final layout ended up being a few pages further into the book, I rewrote yet again. It all seems so simple, this finished caption, maybe even a bit boring, yet it says what needs to be said. Believe me, it is the result of hours of mulling and rearranging.


Frank and Altha Baker donated a portion of their land for the Pilot Mountain School site. The school would face the South Mountains seen behind him in this undated family photograph.﻿

I'm almost finished with the entire project, only a few odds and ends to tie together, not simple little odds I might add. Then the actual printing.

Gretchen
Posted by Gretchen Griffith at 9:47 AM