I could use some old fashioned spelling advice right about now as my schoolhouse project is winding down. I'm in the final editing stages and it's not all fun and games. It's tedious and detailed. For example, take the name of an early school in the community. Heavner. Or is it Havener? Or Hevaner? Or, as handwritten on the back of this 1925 class picture, Hevener. 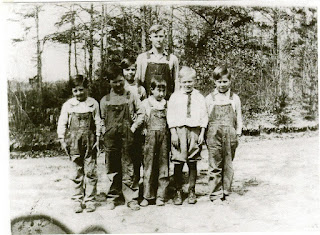 Much to my dismay, it's all four, depending on which source I use. Some little man back in the 1920's sat at a meeting taking notes in the school board minutes and guessed at the spelling, quickly jotting down the word, not even considering the problems some obscure author would have almost a century later.

I'm picking the superintendent's spelling - Heavner. I hope he could spell!

Spelling instruction at Pilot Mountain School was by memorization or by phonics, depending the decade and the latest trend. One person I interviewed said she never learned phonics or letter sounds, that she can't to this day, figure out how to spell an unfamiliar word. If she hasn't memorized it, she can't spell it. Another man said the opposite. He learned to spell using letter sounds, made perfect scores on all his weekly spelling tests every year and has the certificates to prove it.

Between the two spellers, there's ten years and a deep division in teaching methods. Why Johnny can't spell? I see why. This project made it clear.

Gretchen
Posted by Gretchen Griffith at 8:41 AM