Not the Ordinary Wine Tasting Tour

I've been married to my wonderful, patient husband for 43 years as of this September 14. It's quite an accomplishment to say the least, especially since I've added on this project and dragged him through some of the most unusual situations a marriage could endure. Even our anniversary celebration this year was connected to the Pilot Mountain Schoolhouse project. I was doing "research," but in this case he was an eager participant.

We went on a moonshine tasting fundraising tour sponsored by the Catawba County Historical Society. You read it right, not the ordinary wine tasting for us, no this was actual moonshine. Legal. (I asked.) I should have known it was going to be a different kind of night when we arrived in the parking lot and first thing were given mason jars filled with instructions. 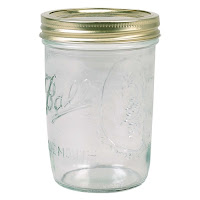 Although the illegal distilling trade was well established in the South Mountain area around Pilot Mountain, the bootleggers there had no monopoly on the market. Nearby Catawba County was equally as prolific, as we discovered on this tour. And a tour it was, four airconditioned, comfort coach busloads of mountain dew singing modern day yuppies peeking into the speakeasy world of prohibition. We followed the same route NASCAR driver Junior Johnson once ran. "Here's where the largest bust..." the guide pointed to the lake's edge. "Here's the garage where the cars were adapted to the trade." We drove past delapidated buildings that once were fine dining establishments covering for backdoor liquor markets, brothels (who would have guessed) and the jail where a notorious bootlegger tapped into his own confiscated kegs there behind the courthouse while the law/kin folk looked the other way.

When we returned to Murray's Mill, a restored historical site in Catawba County, we were treated to a bar-b-que dinner and live bluegrass music by the group Kudzu. That's when the tasting party began. Apple pie flavored shine. Peach flavored, cranberry, all yuppified moonshine in a cough medicine sized dose exchanged for a ticket from our mason jar.

None were to my taste or even to my sense of right vs wrong. The extended research I heard on the tour was thorough, well documented and went right along with my own study. Except that I also include the child's side of the moonshine trade, the impact when the father was in jail or when the revenuers were knocking at the door or when the child couldn't stay awake in class because he was up all night helping in the family business in the dark with only nature's light to work by.

As an unplanned bonus, there in the cloudless sky above the waterwheel turning in the creek beside our table was the biggest, clearest full moon shining down on us all.

The stories that moon could tell!

Gretchen
Posted by Gretchen Griffith at 7:56 AM