I'm fine tuning my manuscript, chapter one especially, checking to make sure the historical information I'm presenting is worded correctly to match the library research with the stories I've caught in my net.

When I was atop Pilot Mountain last week, I imagined myself back in the days of chapter one. I stood next to a stone wall, supposedly erected in the early 1800's for a gold mining enterprise, but also used during the Civil War for defense against the invaders. My question, could it have been there earlier, when the overmountain men marched through the valley on their way to change the course of the Revolutionary War? 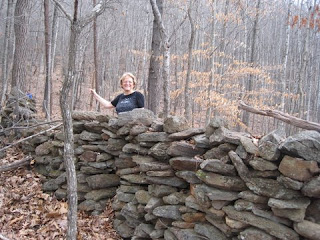 Standing there, I could almost hear the horn in the west signaling to the mountain men, "Alert! Muster now!" I tried to imagine sounds of hundreds of men marching in the valley below me on their way to fight Patrick Ferguson and his British troops. Snapping sticks. Crunching leaves, because it was late September when they passed through. Horses snorting. Voices? Maybe, but these men were more intent on finding the elusive Ferguson than on conversation. They found him at King's Mountain and the rest, as they say, is history.
For a most interesting look at this same trek, click HERE and listen to master storyteller Bill Carson tell about the overmountain men and their march through the valley. There are road signs now, labeling the two- lane road in front of Pilot Mountain School as part of the Overmountain Victory National Historical Trail. They've been there since 1980 when a group of men re-enacted those days from two hundred years ago, days when there were no signs directing the way on paved roads, no fast food lunch breaks, no motels. These historians marched from Virginia, from Tennessee, from western North Carolina, past the schoolhouse, on toward King's Mountain. They were not just pretending. They were honoring.
That's what storycatchers do, honor those who came before us. In my own way, I have my distinct version of re-enactment. I use words instead of costumes.
Catch of the day,
Gretchen
Posted by Gretchen Griffith at 8:12 AM